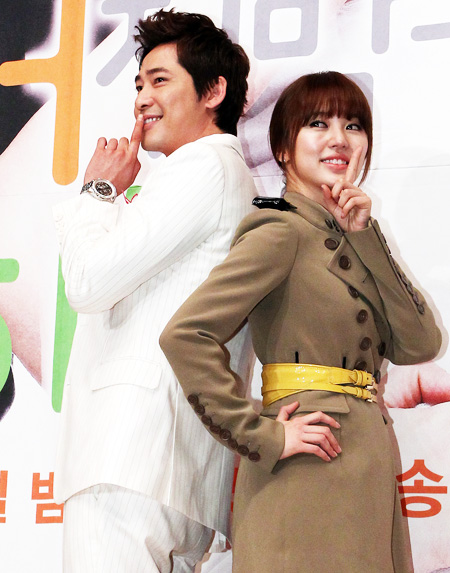 Kang Ji-hwan, left, and Yoon Eun-hye pose for a photo at a press conference for the new TV drama "Lie to Me" at the SBS headquarters in Mok-dong on May 3. The romantic comedy will premiere Monday to compete with other love stories showing on the small screen. / Yonhap

May sees an influx of romantic comedies decorate the small screen, and "Lie to Me" throws its hat into the ring as it premieres tonight on SBS.

The TV drama tells the story of a capable, professional young woman who ends up getting involved in a fake marriage.

Gong A-jeong, played by Yoon Eun-hye, works for the Ministry of Culture, Sports and Tourism. She is smart enough to pass the civil servant examination and is sweet-looking. But the 28-year-old is less successful in the love department.

One day, she meets an old friend So-ran, who has recently tied the knot with her first love. When So-ran teases her about being single, A-jeong, annoyed, abruptly says that she is married, igniting an imagined marriage rumpus.

Her accidental fib takes concrete shape as it spreads through word of mouth, and her imaginary husband manifests as Hyeon Gi-jun, the owner of World Hotel (played by Kang Ji-hwan).

Yoon said her character is similar to other rom-com heroines.

"A-jeong is more mature and passionate about her work than my previous characters", Yoon said.

"Some 80 percent of the scripts I receive are romantic comedies. I think it would be best to choose what people want to see from me".
Yoon, once a member of girl band Baby VOX, successfully made the transition to acting, appearing in television soap operas such as "Princess Hours" (2006) and "Coffee Prince" (2007) and recently in the movie "My Black Mini Dress".

"Gi-jun is the president of a hotel and is a hardhearted person, so I try to exclude comical elements", Kang said.

Kang and Yoon both said they knew they would eventually work together as co-stars.

"I had a feeling that I would act with Yoon someday", Kang said. Yoon said she once sat with Kang at the same table at an award ceremony. "I felt then that our acting careers would later overlap in the same drama", she said.

Though Kang said "Lie to Me" tries to distinguish itself from other romantic comedies, the drama, however, seems to have a long way to go.

In the preview, A-jeong collapses after being stung by a bee at a ministry event and Gi-jun brings her to the hospital, hinting that the two are destined to be together. Such coincidental plotlines are commonly echoed in romantic comedies.

Park Ji-yoon, a singer and actress, returns to the small screen, playing the role of a general manager at Gi-jun's hotel.

"I stand in front of the camera after some eight years and I'm thrilled to join such a great drama", Park said.

Rivaling "Lie to Me" for the Monday-Tuesday slot is KBS' "Babyfaced Beauty".

The plot is also centered on a slight deception and stars singer-turned-actress Jang Nara, one of the most prominent hallyu stars in China. Making a return to Korean screens after six years, Jang plays the role of So-yeong, who lies about her age to work for a fashion company.

MBC's "The Greatest Love" is another romantic comedy that premiered last week. Gong Hyo-jin appears as a singer past her prime while Cha Seung-won plays an arrogant star.

Not to be left out, KBS will air the drama, "Romance Town", beginning Wednesday. It shows how a person's life changes after winning the lottery. Sweetheart Sung Yu-ri plays a housekeeper who wins 10 billion won but continues to work as a maid.
It remains to be seen whether "Lie to Me" will indeed stand out from the pack.

The TV soap airs Mondays and Tuesdays on SBS at 9:55 p.m.

"'Lie to Me': new spin on rom-coms? "
by HanCinema is licensed under a Creative Commons Attribution-Share Alike 3.0 Unported License.
Based on a work from this source