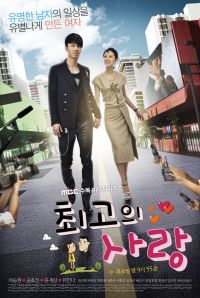 16 episodes - Wed, Thu 21:55
Synopsis
A romantic comedy about a former star singer named Koo Ae-jeong who finds herself entangled in a relationship with Dokgo Jin, the biggest celebrity in the country.

Dokgo Jin (actor Cha Seung-won) - Irritable celebrity who pursues perfection
Koreas top celebrity! His next move is a foray into Hollywood, but none of his movie projects get green-lighted. After getting enmeshed in a relationship with Koo Ae-jeong, his career and life start to spiral downwards. Whenever shes around him, his heart rate goes up because she drives him crazy.

Koo Ae-jeong (actress Kong Hyo-jin) - Intolerable and obsessive ex-celebrity
A former member of one of the early popular girl groups. She was a sexy figure. / She used to be the sassy one in her group.
At the height of her groups popularity, she was the most popular member. But now she makes a living by making guest appearances on TV where she is fussy and annoying. After getting involved with Dokgo Jin, she receives hate mails from his fans and is also blamed for his faltering career.

Kang Se-ri (actress Yoo In-na) - Celebrity wannabe
She dated with Dokgo Jin for just a month. Despite their breakup, Dokgo Jin and Kang Se-ri pretend that theyre still dating to avoid negative publicity. When Koo Ae-jeong was a star in her heyday, Kang Se-ri was a nobody. But now every girl wants to be just like Kang Se-ri. She is also the host of a popular TV dating show.

Yoon Pil-joo (actor Yoon Kye-sang) - Handsome oriental medicine doctor
He is a well-mannered, thoughtful and caring person who has it all. He has no interest in celebrities and their outrageous lives. Under pressure from his mother, he agrees to appear on a TV dating show, but after finding out that Koo Ae-jeong will also be appearing on the same show as a guest, he becomes very eager to meet her.

View all 481 pictures for "The Greatest Love"