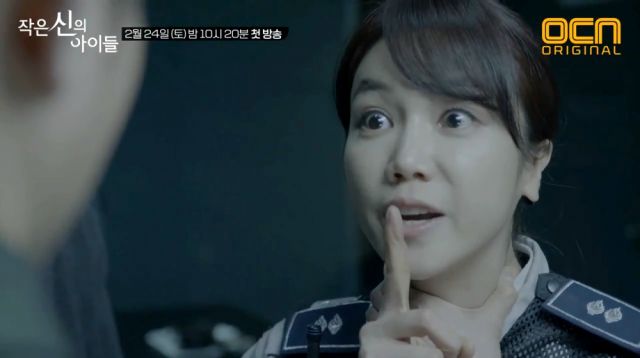 See that, series? I can use random foreign titles too! Sass on my part aside, "Children of a Lesser God" has released its second short character teaser featuring Kim Ok-vin's Kim Dan. The title of this piece is more than a swing at the drama's name, as we finally get to see the infamous bell, which may be a material one.

While Cheon Jae-in's (Kang Ji-hwan) character is exactly as I expected him to be, at least judging from his short teaser, Kim Dan had been slightly different in my head so far. The detective looks involved, determined and more desperate than I expected. I somehow thought that she would be a quiet, brooding outcast, so seeing this energy from her is a great surprise. She clearly takes her gift seriously, rather than seeing it only as a burden. She may not be able to quite explain her method of working, but she sure uses it.

Speaking of said gift, I never thought that the bell would be an existing object like we see in this video. It could still be just a vision or a visual representation of what she feels or sees, but it looks like a typical charm, so I'm leaning towards it being an actual physical object. Why this object rings for people's death and who gave it to her are questions we can hold onto for now.

Dan has obviously faced her share of disbelief, as she tries to explain to Jae-in that she has a feeling she cannot describe, knowing full well that he probably won't believe her. I assume that the teaser's last scene is her reenactment of a killer shushing and strangling their victims while saying that they will bring them salvation. Perhaps she thinks this is enough to convince our hero, but I doubt it. How Jae-in will come to believe someone who goes against everything he considers logical is a point of interest for me.

I look forward to more promotional goodies from "Children of a Lesser God", which will be premiering on the 24th of this month on OCN.

"[Orion's Daily Ramblings] For Whom the Bell Tolls in Second Teaser for "Children of a Lesser God""
by HanCinema is licensed under a Creative Commons Attribution-Share Alike 3.0 Unported License.