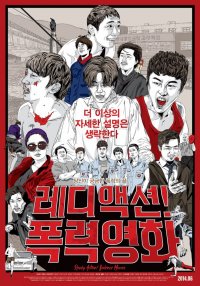 Synopsis
1. Extreme (Min-ho is unbeatable, 민호가 착하니 천하무적) by Jung Jae-Woong
"Why did you do that to me?"
Min-ho is lost and searching for his way back to Seoul in an isolated village when he gets beat up by a bunch of gangs and a couple. He fights back nicely...

2. REAL (Making Film, 메이킹 필름) by Choe Won-kyung
"Hey ****er, untie me!"
In a run-down room, a man is tied from head to toe with a rope and another man wearing a mask. While they swear and yell at each other, the man in the mask can't control the anger he's been pressing down...

3. BITTER (My fight, 나의 싸움) by Kim Do-kyoung
"The winner is the strongest"
In an isolated neighborhood back alley, Do-kyeong declares a fight with a neighborhood fighter and a gangster to prove that he is strong...