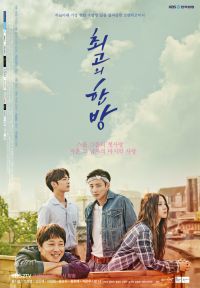 32 episodes - Fri, Sat 23:00
Synopsis
Yoon Si-yoon ("Mirror of the Witch") and Kim Min-jae-I ("Romantic Doctor Teacher Kim" and "Goblin") star in a variety drama that shows how growing up means life giving you a few hard hits. When a young idol prone to scandal meets a model student who dreams of singing, their lives will come together to form the perfect kind of musical chaos.

Yoo Hyeon-jae (Yoon Si-yoon) is a free-spirited idol from the popular group J2. He is immensely talented and had a meteoric rise to fame. Lately, thought, the only things he is in the news for are his scandals.

Lee Ji-hoon (Kim Min-jae-I) is an aspiring singer who wishes to be an idol. He is a model student. The people raising him expect Lee Ji-hoon to take the civil service exam. That doesnt stop our idol wannabe from dreaming of becoming an idol trainee, though.

When they collide, the singer and the dreamer both take charge of a crew of 20-something-year-olds that hang out on top of the worlds hottest attic.

There, they chill with Choi Woo-seung (Lee Se-yeong from "Vampire Detective"), who is a repeat student that has failed her civil service exam, and her boyfriend Yoon-ki (Lee Gwang-soo from Running Man). They also hang out with fellow struggling youths MC Grill (Dong Hyun-bae from "Shut Up: Flower Boy Band"), MJ (Cha Eun-woo from Astro) and Do Hye-ri (WJSNs Bona). All of them are trying to figure out where they want to go in life. And while they figure out their first love, former youths Lee Gwang-jae and Hong Bo-hee (Cha Tae-hyun from "Producers" and Yoon Son-ha from "Six Flying Dragons"), the people raising Lee Ji-hoon in a super-weird family dynamic, are trying to figure out their last. But when they all come across a scandal-making free spirit like Yoo Hyeon-jae, is reality going to be a bit too hard of a hit?

View all 152 pictures for "The Best Hit"