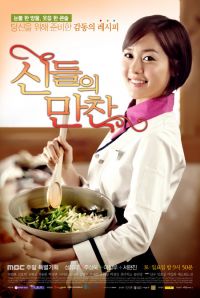 32 episodes - Sat, Sun 21:50
Synopsis
There are two women fighting over a single destiny. This TV series tells a story about Jun-yeong, who inherits the brilliant cooking skills of her mother and embarks on a path of dazzling success. Then there is In-joo who wishes to be like her mother and makes tremendous efforts to surpass her rival, Jun-yeong. The rivalry between the two women takes place at the Arirang, which is Koreas top authentic cuisine restaurant. The characters find individual happiness through the foods they cook and serve at the restaurant. And they create delightful and divine foods amidst the antagonism and reconciliation, all for the love of food. The sparks fly in the tension between the two women over who will eventually control the Arirang restaurant.

Koh Jun-yeong (Actress Seong Yoo-ri)
When she was young she found that people were delighted with the food she cooked. This opened her eyes to the realization that food could make people happy. She is the happiest person in the world when she is cooking in a kitchen. Jun-yeong gets her hope-filled spirit from the belief that there is love and happiness all around her. Unlike her passion for the foods, she didnt think much about finding a person to love until someone special appears. For the first time in her life, she feels love stirring inside her when she meets Jae-ha. But Jae-hae is already in a relationship with someone else, creating concern for Jun-yeong.

Choi Jae-ha (Actor Joo Sang-wook)
He is intelligent, handsome, and from a reputable family. On top of all these, he also has a well-rounded personality, which would make any person envy him. But outside of work, he is hardly perfect, which makes him even more charming. Due to his casual friendly manner around all kinds of people, he is wrongly perceived as being a playboy. However, in reality, he is devoted to In-joo, whom his parents have arranged for him to marry. He never found anything too difficult to overcome or excel. Therefore, it baffles him that he cant do anything right around Jun-yeong. And he finds himself returning to Jun-yeong again and again.

His late twin brothers dream was to become a chef. He changes his name to Hae-mil from Do-woon in memory of his mother. Do-yoon becomes a world-famous chef and then decides to return to Korea, the home country of his mother. One of the reasons he settles on working at the Arirang restaurant is because of his mother. He wants to see his mothers reaction when she sees him working under Do-hee, who is his mothers longtime rival. Once he accomplishes this, he intends to leave Korea. But there is a girl called Koh Jun-yeong who holds him back.

Ha In-joo /Song Yeon-woo (Actress Seo Hyeon-jin)
People tell her she is a talented, beautiful and warmhearted chef just like her mother. She is a spitting image of her mother. These compliments initially make her proud but then dishearten her. She knows that she has to work harder and be more disciplined to live up to her reputation as the daughter of Sung Do-hee. Although nobody questions her skills, In-joo constantly feels pressure to be better. Living in her mothers shadow, she is a lonely soul.

Feast of the Gods | Cast

Feast of the Gods | News

Feast of the Gods | Shopping

Feast of the Gods | Pictures

View all 345 pictures for "Feast of the Gods"

Feast of the Gods | Videos | Suggest a video

Feast of the Gods | Links | Suggest a link

Feast of the Gods | Reviews

Feast of the Gods | Facts

Feast of the Gods | Community