[HanCinema's News] "Miss and Mrs. Cops" and "The Gangster, The Cop, The Devil" Pass Million Viewer Admissions Over Weekend 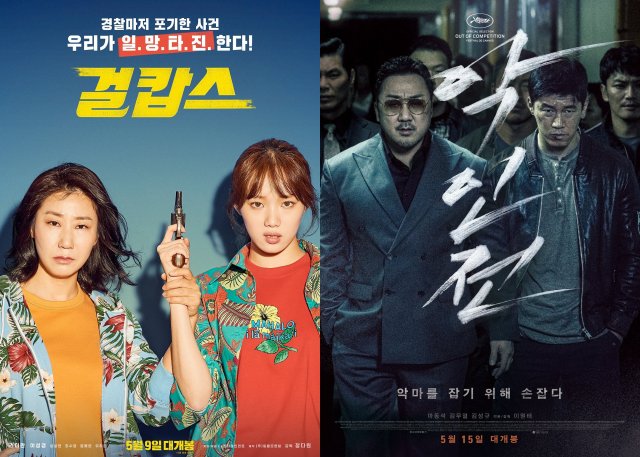 In its first five days "The Gangster, The Cop, The Devil" achieved an impressive 1,480,647 viewer admissions. The film has taken advantage of a South Korean market which has not had a serious criminal gangster movie for quite some time. The press "The Gangster, The Cop, The Devil" has gotten for appearing in the Midnight screening at the Cannes Film Festival was another likely factor to its success.

"Miss and Mrs. Cops" also achieved modest success in its second weekend out, ending the weekend with 1,227,867 total viewers. The movie has been the topic of mild debate over whether it can really qualify as a feminist movie, when the only real way to make that argument is by spotlighting the two female leads.

"Miss and Mrs. Cops" was barely overcome at the box office by the latest Avengers film, which has broken the previous foreign film record held by Avatar. The latest Avengers film appears unlikely to break fourteen million viewers however, and will probably finish its run at number five on the all time box office list behind "The Admiral: Roaring Currents", "Extreme Job", Along With the Gods: The Two Worlds", and "Ode to My Father".

"[HanCinema's News] "Miss and Mrs. Cops" and "The Gangster, The Cop, The Devil" Pass Million Viewer Admissions Over Weekend"
by HanCinema is licensed under a Creative Commons Attribution-Share Alike 3.0 Unported License.