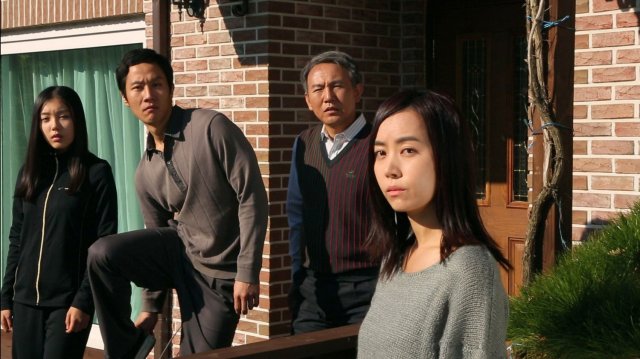 If you've ever gone to a touristy location at the demilitarized zone between North Korea and South Korea, you've probably noticed that picture-taking is strictly prohibited and that soldiers may confiscate your camera. With its opening setpiece "Red Family" presents the extremely implausible hypothetical situation in which such regulations might matter. Basically, that some apparently typical tourists are actually North Korean spies.

The intriguing premise of "Red Family" takes a turn for the worse as soon as they get home. Behind closed doors the titular spy family behaves in an outrageously stereotypical manner that would have seemed goofy even back in 2013. For a sense of perspective, mainstream movies like "Secretly and Greatly", "Commitment", and "Spy" all had similar premises and were released around the same time. Yet in all of these movies the deep cover spies were capable of cheerful casual banter with one another.

Seung-hye (played by Kim Yoo-mi), by contrast, is constantly barking out orders in a very vicious tone of voice. Later revelations that Seung-hye is not as competent as she looks only serve to make her hard-boiled attitude look even more ridiculous in retrospect. The disproportionate misery the spy family wallows in really just makes them seem poorly suited to their chosen profession, which begs the question of why they're in South Korea to begin with.

These one-note performances are contrasted ironically with the dysfunctional normal South Korean family that lives next door. They're basically situation comedy characters, the wife in particular coming up with zany schemes that inevitably go horribly wrong. Though well-worn these characters do at least feel real, and when they're threatened by loan sharks the stakes are significantly stronger  than the spy family's very abstract ethical conflicts within the backdrop of unironic admiration of South Korean culture.

The way "Red Family" uncritically buys into right-wing framing about North Koreans was also rather odd. The mainstream movies I mentioned before all had significant criticisms of domestic South Korean culture, yet the spy family admires the normal one even as the latter proves helpless in the face of explicit capitalism centered problems. A dinner sequence wherein the two families discuss relations between North Korea and South Korea is similarly shallow, with the secret spy family making effective criticisms of South Korea's reunification policy yet still conceding to vague South Korean talking points as if they had never conceived such ideas before.

But worse than that are the various assassination missions. As far as I know even far right-wingers don't allege that North Korean fifth columnists assassinate random defectors. A lot of them do kill themselves because they're unable adapt to South Korea's often alienating capitalist culture. While this is beyond the scope of "Red Family" that's kind of my point. The movie has aged horribly and no aspect of it can be used to meaningfully discuss the cultural distance between North Korea and South Korea in the present day or even back when it was made. It might as well be a stage play, particularly given the uninteresting cinematography.