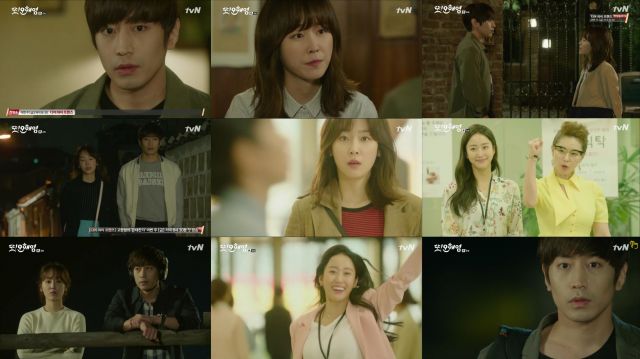 The sheer goofy awkwardness of Hae-young's new living arrangement is played for maximum laughs. I like how for all the obvious problems the secret doorway causes, Hae-young never considers just, you know, moving to another apartment. It's not even that she likes Do-kyeong all that much just yet. Hae-young is a woman who would rather try to avoid problems piecemeal instead of trying to deal with them in a single fell swoop. It's a character flaw that's well disguised by the general comedic design of "Oh Hae-Young Again".

Plot movement is fairly minimal here, although "Oh Hae-Young Again" is so light on story to begin with the effect is not immediately noticeable. I've come to see Do-kyeong's powers of Hae-young precognition less as something that needs to be explained and more a storytelling device intended to beg the question of, all right, how exactly is Hae-young going to end up performing the following implausible action? How exactly can she be so unpredictable?

In context, of course, Hae-young's actions always make sense. The woman is well-attuned to spontaneous situations. Indeed, even in the context of the drama excessive romantic gestures are not so strange. The entire joke behind Hoon (played by Heo Jung-min) and Anna (played by Heo Young-ji) is that they are excessively physical, to the point of it being kind of dangerous, without really knowing or caring about the more subtle emotional backdrop typically necessary for such behavior.

The lack of backdrop with Hoon and Anna really highlights the extent to which context is ever so important for everyone else. Hae-young can joke about her borderline traumatic bullying at the hands of the other Hae-young most of the time, yet as we see here, all she can do is make a pointed effort not to react when faced with the same prospect again. The other Hae-young remains a frustrating character in that I want to hate her, yet she mostly just accidentally inspires other people to be jerks rather than engage in any vicious behavior personally.

There's similar irony in the presentation. Evidently "Oh Hae-Young Again" is being preproduced to a fair extent, because the cherry blossoms are all over the place. Spring is in the air, yet it's only at nighttime that anyone acts all that romantic because in the daytime there's so much work to be done. Kudos to the production team, by the way, for always finding new ways to make Do-kyeong's job seem interesting.