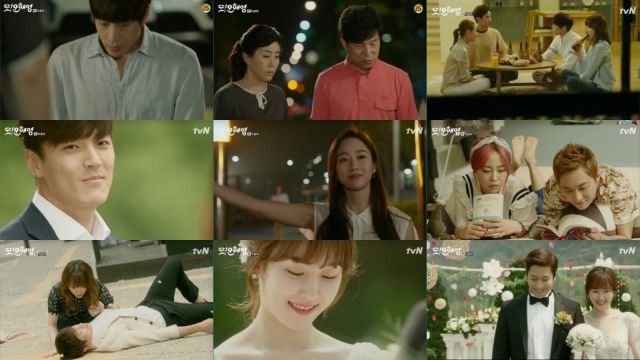 I got the distinct impression for most of the last episode of "Oh Hae-Young Again" that writer Park Hae-yeong (yes, that is her real name) never really had a plan for finishing any of the drama's storylines. She just had these really great characters, and the interesting hook of the mysterious visions, and figured the rest would come naturally. Well, two extra episodes and an extended finale weren't enough. The ending of "Oh Hae-Young Again" is sloppy, coming up with new conflicts while only clumsily resolving the old ones.

For all these obvious critical failures, though, I still can't really get mad at "Oh Hae-Young Again" because if any drama has ever emphasized the whole "journey rather than the destination" philosophy, "Oh Hae-Young Again" is it. Because Hae-young and Do-kyeong have never really had their eyes on the end point. The main conflict was not the content of the visions, but rather Do-kyeong coming to appreciate that there's little point in worrying too much about the future.

All the storylines have integrated this theme somehow- some better than others. Jin-sang still does not appear to have any idea how to intentionally come on to Soo-kyeong barring a crisis situation, and their relationship has pretty much turned into a permanent compromise that they will try to figure something out that does not involve Soo-kyeong moving overseas or Jin-sang drinking himself to death out of personal shame. It's funny watching them try, but mostly, it's just relieving knowing that they're willing to keep trying.

The other relationships are a tad more perplexing. Ji-an never really did anything of relevance except be a terrible mother, and Anna never moved past being Hoon's frightfully exuberant younger girlfriend. Hae-young's parents...well, they were relatively uncomplicated people to begin with, actually. Of course Deok-yi is stubborn and prideful, because her daughter is the same way. It's a generational cycle, after all.

And that's where "Oh Hae-Young Again" leaves off emotionally. Life will move on, solutions will fall into place, you can always count on the support of loved ones...all those nice mental reassurances that really make "Oh Hae-Young Again" a great drama even after a really difficult day. Even if the narrative doesn't tie up very well, that flaw too works well in context of the drama's greater messaging. It's all right to mess up and look foolish as long as everyone is having a good time and mutual compassion is not an issue. I'm OK with that.