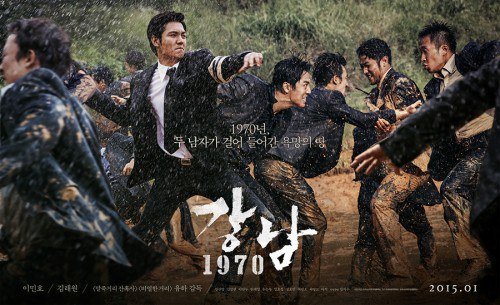 "Gangnam Blues" gathered 150,000 audiences on the first day of its release and ranked first place.

According to the Korean Film Council, "Gangnam Blues" gathered 152,578 people on the first day of release with an accumulated numver of 163,400. Despite the fact that it's adult rated, it still came in first of the Box Office.

Director of "Once Upon A Time In Highschool" and "A Dirty Carnival", Yoo Ha is out with his third street film and it exceeded the record breaking opening score of the 2010 movie "The Man From Nowhere".

The movie also beat "Ode to My Father" which has been in the winning streak throughout the 6 weeks.

""Gangnam Blues" beats "Ode to My Father""
by HanCinema is licensed under a Creative Commons Attribution-Share Alike 3.0 Unported License.
Based on a work from this source