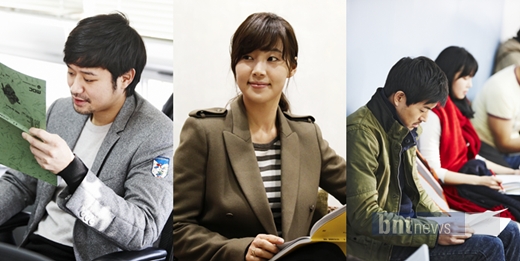 Chun Jung-myung and Han Ji-hye have started reading their scripts for the new MBC Monday Tuesday drama "The Duo".

The atmosphere around the script reading session was a happy one as older actors made witty conversations and Lee Sang-yoon made a surprise song performance. Chun Jung-myung, Han Ji-hye, Lee Sang-yoon and Seo Hyun-jin were present there on the 6th floor of the MBC Dream Center, including scriptwriter Kim Woon-kyeong and producer Lim Tae-woo.

As Lee Sang-yoon was late for the script reading, producer Lim Tae-woo joked that he had to sing, then he got up right away and sang the national anthem.

Yoon Yoo-sun and Lee Sang-yoon showed tight teamwork as they showed lots of care for each other as they act as "Mak-soon" who is "Gwi-dong's" mother and changes the fate of the two lead actors.
Chun Jung-myung will be playing the role of "Cheon Doong". At the center of attention for Cheon Doong and Gwi-dong will be "Dong Nyeo", Han Ji-hye. Seo Hyun-jin will play "Dal-I", who is the daughter of the shoemaker.

In addition to this, historical drama actors Lee Moon-shik and Gong Hyung-jin have been casted on to the attraction.

Producer Lim Tae-woo says, "This drama will inspire anybody. The best actors, scriptwriter and staff have come together so it will create a historical drama everyone can identify with".

Meanwhile, Monday and Tuesday special drama "The Duo" will follow up "Queen of Reversals".

""The Duo" Cheong Jeong-myeong, Han Ji-hye starts reading script for "Queen of Reversals" follow up."
by HanCinema is licensed under a Creative Commons Attribution-Share Alike 3.0 Unported License.
Based on a work from this source