Suzy, until when are you going to be pouty? 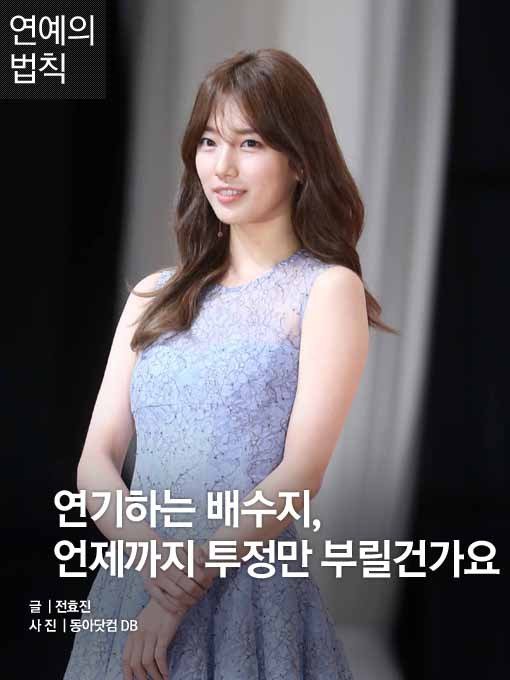 KBS 2TV drama "Uncontrollably Fond" ended with 8.4%. The drama came forward with Kim Woo-bin and Suzy, two top stars but the drama was criticized for its anachronism. However, the drama is being said that Suzy over-reviewed to put the blame on writer Lee Kyeong-hee.

"Uncontrollably Fond" maintained its percentage at 8% even though it wasn't popular. MBC "W" and SBS "Incarnation of Jealousy" came in ahead of it just by 1~2%. Hence, the drama wasn't all that bad in terms of content and genre. Also, despite the fact that top star dramas have failed in the past, "Uncontrollably Fond" proves that traditional mellow is still a favorite with some of the viewers.

The reason for its failure is partly the Suzy's fault. The twenty part drama showed that Suzy has become more comfortable with delivering her emotions. However, her way of speech is a chronic matter that offsets her expression and it disturbed the concentration on the drama. In addition, traditional mellow is all about delivering emotions but Suzy didn't fulfill that bit.

Suzy is blunt when she acts and so was she in "Uncontrollably Fond". No-eul was always pouty or grumpy in the drama. She became the breadwinner of the family after her dad passed away and her relationship with Kim Woo-bin required a lot of emotional effort. However, when she speaks, she wasn't sad, lovable or shocked. She always seemed angry. In the end, the story revolved around Sin Joon-yeong and she naturally was pushed to the side lines. It was so bad that it almost seemed like she was the one with the terminal disease. She didn't rightfully play the part of a woman whose boyfriend was about to die.

Although everyone's standards in observing an actress may be different, if Suzy just had the 'basics' in acting, she would have been able to overcome the failure of "The Sound of a Flower" and succeed with "Uncontrollably Fond".

"Suzy, until when are you going to be pouty?"
by HanCinema is licensed under a Creative Commons Attribution-Share Alike 3.0 Unported License.
Based on a work from this source