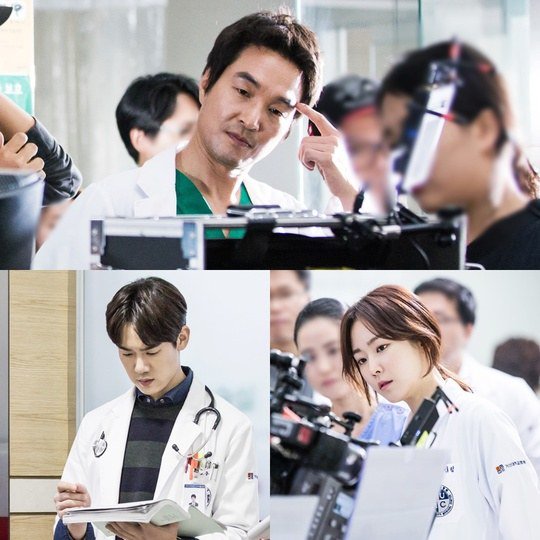 The actors were spotted on site of the poster making. They are checking their scripts and monitoring themselves for a high quality result. To add realism to their characters, the actors observed actual doctors at hospitals and watched reference footages.

Despite the fact that Han Suk-kyu is a veteran actor, he's the most meticulous when it comes to monitoring. He discusses his scenes with producer Yoo In-sik and makes sure every scene is perfect.

Yoo Yeon-seok is showing attachment to his script. Because there are so many 'medical' words he has to remember, he spends every time he can with his script.

Seo Hyun-jin is breaking down every detail of her role. She checks her work with the staff every time the lights go off on set and also discusses scenes with her fellow actors.

"Romantic Doctor Kim Sa-bu" will be released on the 7th of November at 10PM.

""Romantic Doctor Kim Sa-bu" Han Suk-kyu, Yoo Yeon-seok and Seo Hyun-jin at poster making "
by HanCinema is licensed under a Creative Commons Attribution-Share Alike 3.0 Unported License.
Based on a work from this source