Park Joong-hoon: "Playing Detective Is Both Easy and Difficult" 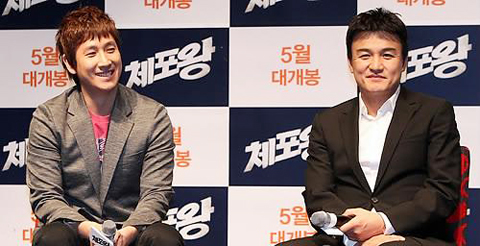 Actor Park Joong-hoon participated in the production presentation of the movie "The Apprehenders".

Park said, "I appeared in the first series of the movie 'Two Cops' 17 years ago. At that time, I played an active and passionate detective like the character that Lee Sun-kyun plays in this movie, and senior actor Ahn Sung-ki played an old foxy detective whom I play in this movie. Now I can notice very well that time has gone so fast". Actor Park Joong-hoon had played various detective characters in his hit movies including the series of "Two Cops" and "Nowhere To Hide", and he also plays a team leader in a serious crime squad in "The Apprehenders" that will be released next month.

"The Apprehenders" is about two detectives in two police stations adjacent to each other in Mapo and Seodaemun having fierce competitions to earn the title of "This year's Arrest King", and Park Jong Hoon and Lee Sun-kyun will have an acting showdown. Park Joong-hoon will play a cunning and greedy detective named Hwang Jae Sung at the Mapo Police Station who easily tries to snatch other squads' cases to raise his own performance. Lee Sun-kyun will play an ambitious detective who is a graduate of the Police University. When he began working as a detective, he lost a case that was almost settled due to Hwang Jae Sung and he felt very frustrated. 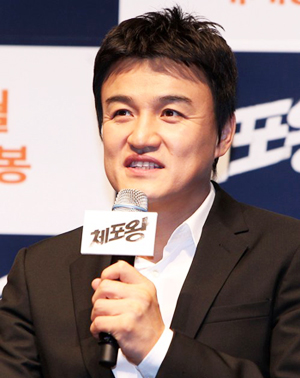 During the production presentation held at the Lotte Cinema in Kwangjin-gu on April 5, Park Joong-hoon explained that playing a detective is both easy and difficult. He said, "There is a joke in the American movie industry saying 'A clumsy actor cannot even play a detective'. When it comes to playing a detective, justice, a team, and anger always come together. So it is difficult for an actor to play a detective badly, but at the same time, it is also very difficult to play a detective very well because generally audiences have so much information about the character of a detective. Actors usually feel pressured for not playing a typical detective even though they are somehow bound by those typical stereotypes of detectives when they are acting. This will be the sixth time that I come to play a detective, but not all detectives were the same. This time, I will play a more realistic detective who is eager to raise his performance of arresting criminals". He added, "Usually a detective confronts the criminals in a movie, but our movie is different because a detective has a confrontation with another detective". He also disclosed his personal stories when he explained the character who undermines others' performance. He said, "My wife had a boyfriend when I first met her.

But I snatched her from her boyfriend and it was the best and biggest interception ever in my life. When we began dating, I found out that she had a boyfriend. I firmly talked to her and made her choose me". The director Lim Chan-ik, who will make his debut with this movie, said, "Actually I wanted to make a whole new story because there have been too many movies that deal with the confrontation between criminals and detectives, and I thought that making a story of detectives who snatch the opportunities to arrest criminals who can cause any crime in any places in Mapo, Seodaemun, or any place between those two places could be very interesting". Actor Lee Sun-kyun, who has appeared in many romantic comedy genres such as the drama "Pasta" and the movie "Petty Romance", said, "I think that I have the homework to try some new character when acting and broaden the boundary of acting that I can play. I enjoyed filming this movie and it was more comfortable than playing a romantic character". The director explained, "As we will tell the story of detectives who put great importance on producing results by arresting criminals, we could not receive any help from the police. We could not film this movie in a real police station, and we filmed it in a borough office or on the set. I felt sorry that we could not have any help or support due to the sensitivity of its political issues".

"Park Joong-hoon: "Playing Detective Is Both Easy and Difficult""
by HanCinema is licensed under a Creative Commons Attribution-Share Alike 3.0 Unported License.
Based on a work from this source