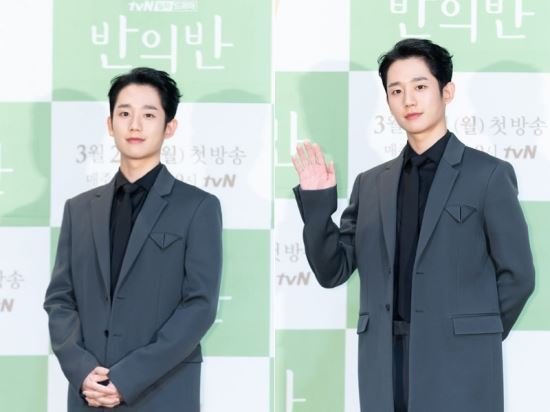 Jung Hae-in recently spoke out at an online press conference for the upcoming tvN drama "A Piece of Your Mind". The press conference would normally have been held in person, but was switched to online-only in response to fears regarding COVID-19.

At the conference Jung Hae-in described his desire to participate in the drama as being motivated by his desire to communicate healing to people suffering from emptiness. This theme, notably, is also present in other recent Jung Hae-in works, from the dramas "Pretty Sister Who Buys Me Food" to "One Spring Night" to the movie "Tune in for Love".

However, Jung Hae-in claims that "A Piece of Your Mind" goes deeper into this theme than his other recent romances. He stressed in particular his interest in the main role he plays, of an artifical intelligence programmer, as being more socially isolated than the characters in his other recent work.

Beyond just his character's profession, Jung Hae-in said he was intrigued by how he underwent the pain of just observing other people, never personally being able to commit to even the idea of an unrequited crush. Jung Hae-in stated that his character would undergo significant character development in this regard over the course of the drama.

Jung Hae-in also had high praise for screenwriter Lee Sook-yeon, with whom he worked on "Tune in for Love". According to Jung Hae-in, he had become a big fan of hers due to his work on the movie and committed at that time to be a part of her next project. In regards to his co-star Chae Soo-bin, Jung Hae-in described her as having a warm heart.

"A Piece of Your Mind" will start airing on March 23rd on tvN in the Monday/Tuesday timeslot. It will replace "The Cursed", and also air half an hour earlier than its precedessor, at nine in the evening.

"[HanCinema's News] Jung Hae-in Talks About "A Piece of Your Mind""
by HanCinema is licensed under a Creative Commons Attribution-Share Alike 3.0 Unported License.