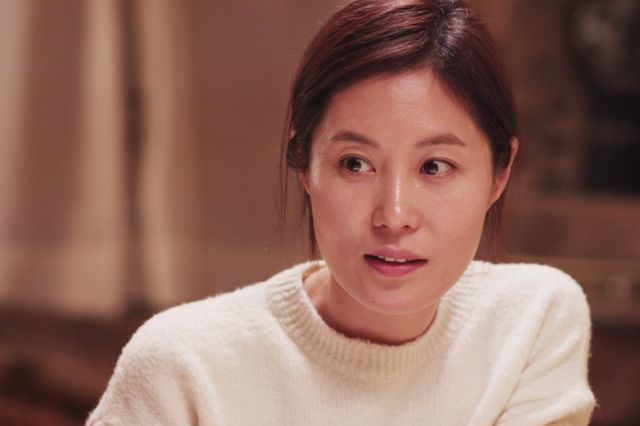 The basic premise is the same for all three individual short films contained in "The Running Actress". Moon So-ri is a fairly well known actress. The people in her life frequently comment on this. As a result, Moon So-ri is often frustrated and annoyed with them. It does not help that Moon So-ri's professional acquaintances are not always the most charming people. So frequently, we are left wondering why Moon So-ri ever wanted to be an actress at all.

I can't help but feel that Moon So-ri directed "The Running Actress" in part to answer this question herself. We do, eventually, kind of get an answer. The final film of the omnibus ("The Best Director") takes place at an obscure memorial service for a director from early in Moon So-ri's career. For the most part the conversations Moon So-ri has here are unpleasant and awkward, as they are in the rest of the omnibus, but we do eventually get to see a fairly touching vindication of the dead man's life in film.

But hey, let's get into those unpleasant awkward conversations a little more. They're the main source of jokes in "The Running Actress", and they're quite good. Moon So-ri, ironically enough, feels limited about how far she can go in arguing a certain point. As the most important person in the room at all times, any opinion having on her part risks killing the woman's aura of personal glamor of being Moon So-ri.

Yet the more we see of "The Running Actress", the less clear it is what exactly the platonic ideal of Moon So-ri is even supposed to be. It's surreal watching Moon So-ri, the beleagured working mother, in the same room as Moon So-ri, the famous actress on the red carpet on television. The former is obviously more real than the latter- she's the one who her family knows on a personal level. Yet the latter one is who everyone thinks of whenever the topic of Moon So-ri comes up.

Even her name feels like a hilariously weird in-joke. Sometimes characters slur the pronunciation so that it sounds like "뭔 소리!", or, "what are you talking about?" and so once again Moon So-ri is put in the position of explaining her position when she doesn't really want to, to people who don't especially care what Moon So-ri has to say anyway. The screaming run that makes up the opening and conclusion to the second part in the omnibus could be inserted into the film at random places and still make full contextual sense.

The end result is a film that's quite funny, albeit morosely, and only really with a healthy amount of distance. Like the sexism, especially in the first section ("The Actress"). It's less about anything being explicitly sexist so much as, wow, some men are stupid. And they never stop being stupid. Also the world is stupid, and it never stops being stupid even though I am a successful middle-aged woman with a husband and child and it seems like everyone should have grown up by now.