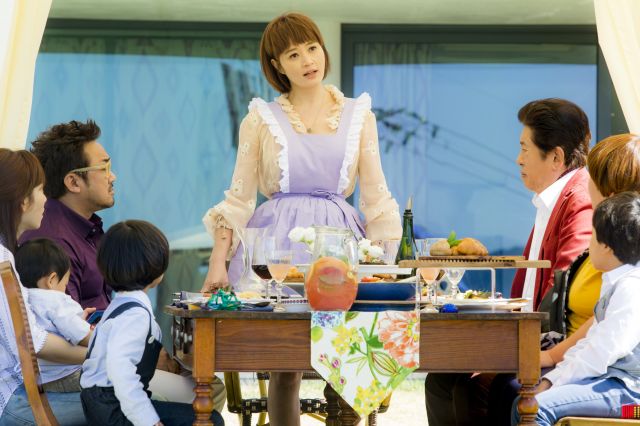 Joo-yeon (played by Kim Hye-soo) is a high-level actress in the Korean entertainment industry, but her star power has faded with age. Or maybe just her abrasive personality, it's kind of hard to tell. In any case, feeling very suddenly professionally unfulfilled in life, Joo-yeon has an epiphany during a visit to the home of her stylist Pyeong-goo (played by Ma Dong-seok). She likes families, and so Joo-yeon becomes determined to create a family through whatever means necessary.

On its most basic, successful level, "Familyhood" is a comedy. Joo-yeon wants to be a good person but lacks the right skill set for it, so she inevitably becomes frustrated and selfish in the process. Kim Hye-soo does good work dealing with this rather sympathetic contradiction. While Joo-yeon is, for example, a terrible chef, it's hard to hate a person who goes to the trouble of cooking food for you when she doesn't have to.

Where "Familyhood" collapses is in attempting any kind of a serious dramatic arc. While Joo-yeon is a well-meaning person, throughout the course of the movie she is nonetheless almost always completely unsuccessful in trying to pull off emotional sincerity. Joo-yeon's main moment of personal bonding comes when she and another character mutally decide to embark on a complicated petty act of revenge.

Director Kim Tae-gon tries to smooth over these problems by introducing ethical issues, but these too fall apart upon closer consideration. Pursuant to Joo-yeon's revenge scheme "Familyhood" takes a fairly funny satirical jab at the idea that people who defy social norms are inherently "brave", when we know full well that Joo-yeon's motivations are selfish and that greater press coverage has in fact rewarded her spiteful attitude. But come the climax "Familyhood" is now using the "brave" argument unironically, and accidentally undercuts its own message when Joo-yeon's fiery demands directly precipitate a medical crisis.

The villains are another major sore point- they're so underdeveloped they end up coming off as sympathetic. Ji-hoon (played by Kwak Si-yang) may be a certified fink, but that doesn't make it right for Joo-yeon to bully him over something he didn't actually do. The father of the child Joo-yeon wants is given exactly one bewildered scene to react to what's happened and is then treated as the bad guy because of decisions other people made without consulting him. The aunt of the child likewise is treated as a villain both for caring too little and for caring too much about a situation that wasn't her fault.

It's not that any of these characters are likable. It's just that they have the exact same flaws that Joo-yeon does, but without the benefit of a screenplay deliberately designed to give them a heart at the last minute in disregard of their prior behavior. Narratively this works to turn "Familyhood" into a huge mess of a film. It can't even be saved by Ma Dong-seok of all people failing to make a convincing scary face.