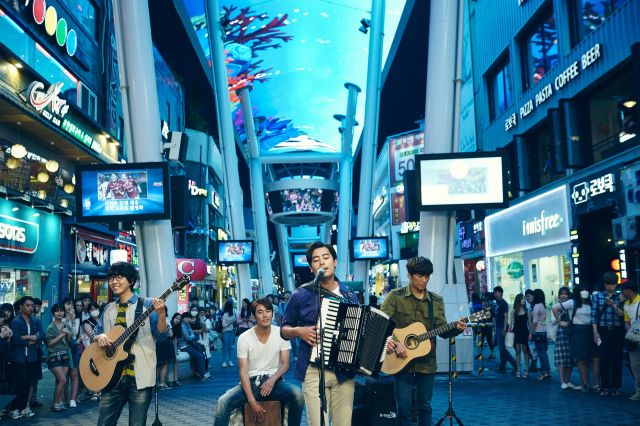 Ho-bin (played by Jo Han-sun) is a mildly famous person who is the drummer in an even more mildly famous band- the kind that gets booked for weddings. The other members want to try and improve their prospects with a road trip and Ho-bin, facing personal problems of his own, agrees. The gimmick is, they're going to take South Korea by donkey. While being followed by a car and camera, which kind of defeats the purpose of traveling around slowly with a donkey cart but whatever, I don't get social media marketing anyway.

"Blue Busking" is a very light road movie with minimal narrative conflict. Ho-bin is kind of an arrogant jerk, on account of his good looks mostly, and at times it falls to the band's bespectacled guitarist Yeong-min (played by Kim Sin-ee) to patch things up between Ho-bin and other members of the entourage. But Ho-bin quite literally spends the whole movie running away from his publicity problems, such that when they finally catch up to him, it doesn't really seem like that big a deal.

Even a romantic subplot is so underdeveloped I didn't realize it was happening until the very end when two characters hold hands as they walk into the sunrise. So what we're left with is a movie that kind of feels like a documentary, in that it's about normal static people who slowly learn that they can, in fact get along with each other. Even the big concert at the end isn't that big. Really, the characters never had a goal more complicated than to just have a good time.

It's lucky that the music is very good, as well as the background scenery. That I would easily characterize as the main strong point of "Blue Busking"- the whole movie is exposition about South Korea's street music scene and rural countryside. That the movie premiered at the Jecheon International Music and Film Festival last year is unsurprising. "Blue Busking" is an embodiment of the same culture that made that film festival possible.

The main issue with "Blue Busking" is that it's such incredibly light watching I'm hard-pressed to come up with any compliments for it aside from generic praise of the ambience. The donkey is the main gimmick worthy of note, and pretty much every scene that the donkey is in is golden. It is either the genesis or the punchline to most of the movie's funniest jokes, although Yeong-min certainly gets his shots in as the person in the band least inclined to personal drama.

There's irony for you- "Blue Busking" is at its best in the least engaging moments, because that makes it all the easier to passively take in the excellent background of its offbeat music and scenery. If you're impatient for a worldwide release you might have better luck finding Basilicata Coast to Coast, the Italian movie on which "Blue Busking" is based. I suspect I would have vaguely liked that movie for the same reason I liked "Blue Busking". The premise is simple and hard to screw up.