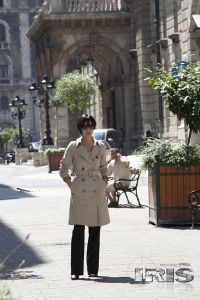 Kim So-yeon has been filming in Hungary for the scenes where she is Kim Seon-hwa, the North Korean Secret spy agent. They have finished filiming in Hungary but they have been spotted by Hungarian reporters during their 4 week stay. The unreleased stills of this drama are out!

Already thousands of Hungarians have viewed these stills. The scene contains a lot of action and Hungarian police doing stunts!

The weather is sultry but Kim is doing her best action moves in those black leather jumpers.

Can't wait until these the drama is finished!

"[ChanMi's drama news] Kim So-yeon, "Iris" is in Hungary Report"
by HanCinema is licensed under a Creative Commons Attribution-Share Alike 3.0 Unported License.
Based on a work from this source