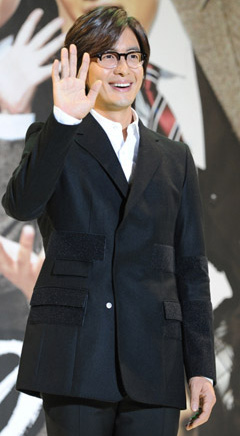 Star actor Bae Yong-joon, resting at home with a herniated cervical disc after discharge from hospital, is unlikely to return to KBS 2TV drama "Dream High".

After making a special appearance on the show, his neck got worse and he was hospitalized for 17 days from Jan. 4. Bae sustained the injury when he fell from a horse while shooting "Taewangsasingi" ("The Legend" - "The Four Guardian Gods of the King") in 2007. It was exacerbated by the tight shooting schedule of "Dream High" and extremely cold weather.

Management agency KeyEast said, "Although Bae is getting better, he still needs to be cautious".

Bae appeared in the first four episodes of "Dream High", which proved so popular that more appearances were considered. The agency is being noncommittal, saying nothing has been decided. Bae plans to move from Samseong-dong to a new house worth W6 billion (US$1=W1,123) in Seongbuk-dong this spring.

"Bae Yong-joon's Injury Scuppers Plans for 'Dream High'"
by HanCinema is licensed under a Creative Commons Attribution-Share Alike 3.0 Unported License.
Based on a work from this source