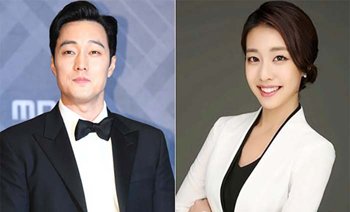 So Ji-sub (left) and Cho Eun-jung

Actor So Ji-sub has been dating a former TV broadcaster for a year, according to the actor's agency.

The agency said in a press release last Friday that So first met Cho Eun-jung as an interviewer on a TV entertainment show about a year ago and they later became romantically involved.

It is the first time the actor has gone public with a relationship in his 24 years in showbiz.

In a letter to fans posted with English translation on his agency's social network, So wrote, "She is the one who keeps my side calmly and supports me with a great help. We have [a] good relationship but there are still a lot [of] things to be careful about". He added, "I will try to be [a] more responsible actor so that I could give you back all the faith you have given me. I promise I will do my best not to let you down".

Cho, who is 17 years his junior, studied traditional Korean dance at Ewha Womans University before starting to work as a broadcaster at an eSports cable channel in 2014. She later turned freelance but is currently attending graduate school.

"Actor So Ji-sub Dating Ex-TV Broadcaster"
by HanCinema is licensed under a Creative Commons Attribution-Share Alike 3.0 Unported License.
Based on a work from this source