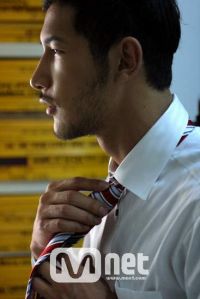 Lee, whose real name is Park Sang-min, was on his way home after attending a party celebrating the end of his KBS drama "Choi Kang Chil-woo" ("Mighty Chil-woo"). He was riding his motorcycle when he hit a railing of the elevated roadway in Hannam-dong, Yongsan at around 2 a.m.

The 27-year old actor died on the spot and was taken to Soonchunhyang University Hospital in Hannam-dong, Seoul. The police have not yet determined if Lee was drunk when he got into the motorcycle accident.

Lee gained fame last year for his role as a dim-witted but loveable Min-yeop in "Coffee Prince".

When he was in elementary school, Lee started participating in ssireum or traditional Korean wrestling. He proved to be an excellent athlete and won gold medals at Korean national ssireum competitions in 1997 and 1998.

However, as a freshman in university, Lee saw model Cha Seung-won on TV and decided to become a model. He worked hard to lose 30 kilos in order to gain the slim physique of a model. He made his debut in a fashion show in Busan in 1999.

With his good looks, Lee soon became a sought-after model, appearing in numerous fashion shows, including the Seoul Fashion Artists Association Collection. He also branched out into acting in dramas, which led to his role in "Coffee Prince".

"Actor Dies in Motorbike Accident"
by HanCinema is licensed under a Creative Commons Attribution-Share Alike 3.0 Unported License.
Based on a work from this source