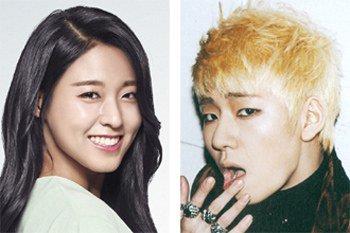 Zico and Seolhyun are two of today's hottest idol stars. They have recently admitted that they are seeing each other.

Their managements announced that they were dependant on each other during hard times and eventually evolved into a relationship. They are only just getting to know each other.

Scandals about the two started a couple of months ago but all their managements said was that they were just 'friends'.

However, they had to admit the truth when a media spotted them together.

There is a formula to this.

Recent scandals of male and female stars are Lee Min-ho and Suzy, EXO Kai and Krystal, JYJ Kim Joon-soo and EXID Honey. They only admitted to being in a relationship after pictures of them together were taken. Although they've broken up now, EXO Baekhyun, Tae-yeon from Girls' Generation, Nickoon and GG Tiffany, Yoon Joon-hyeong and Kara's Goo Ha-ra also admitted to their relationships after their pictures got taken.

However, CNBlue's Kang Min-hyuk and actress Jung Hye-sung, Kim Ki-bum, an actor from Super Junior and Ryu Hyo-young from Five Doll's all denied being together. Eric and Seo Hyun-jin were also speculated of having something but they denied it.

They could be nothing, or they could be lying. If it's the latter, there's no evidence to prove that they are lying. As mentioned above, if there is no proof of them ever being together, they will deny it 100%.

The reason they deny these things is because it affects their jobs.

Especially if one of them is a commercial star, it directly leads to money and their popularity.

This is a slightly different case but actress Kim Min-hee is at risk of having to pay off a big penalty ever since her scandalous affair with director Hong Sang-soo got out.

"Zico and Seolhyun's relationship revealed"
by HanCinema is licensed under a Creative Commons Attribution-Share Alike 3.0 Unported License.
Based on a work from this source