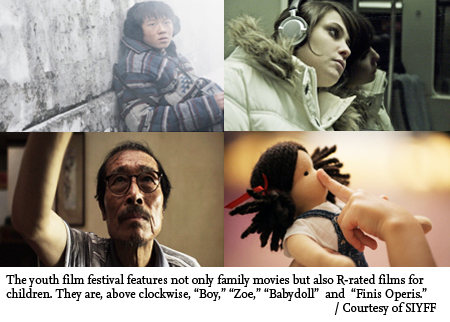 Forget the preconception that a film festival for children only features fuzzy family movies and animations. The Seoul International Youth Film Festival (SIYFF) aims to demonstrate its educational initiative by showcasing a lineup of carefully selected works that includes local premieres and R-rated movies.

The 13th edition of the event kicks off in Seoul, Thursday, featuring 141 works from 37 countries, to last through July 13. Though SIYFF may not be as well known as film festivals in Busan (formerly Pusan) or Bucheon, it is the largest event for the younger age group in Asia, and this year's program saw a record number of submissions, with over 1,200 applications from 65 countries, said organizers.

"The Strongest Man in Holland" (2010), a coming-of-age drama that showed at the 61st Berlin Film Festival, will open this year's event. It is about Luuk, a preteen boy who is teased at his new school about having a physique smaller than his peers. However he finds an unlikely friend in Minke, the tallest girl in school. 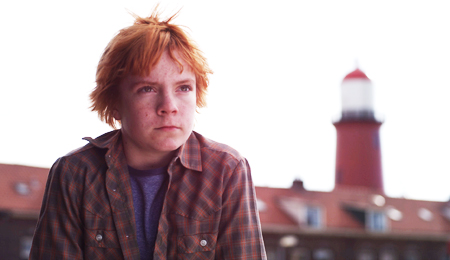 "The Strongest Man in Holland" by Marc de Cloe will open the 13th Seoul International Youth Film Festival on Thursday. The cinema event, the largest of its kind in Asia, will continue through July 13. / Courtesy of SIYFF

The two embark on a search for Luuk's father, whom his single mother had always described as being "the strongest and coolest man in the world". They eventually meet "powerhouse Rene", who agrees to help Luuk in weight training. As Luuk builds his confidence, he discovers more secrets about his family past and comes to realize that strength comes in many different forms.

Director Marc de Chloe and lead actor Bas van Prooijen will visit Korea for the festival and meet the audience to discuss the movie. The film, recommended for children aged 11 to 13, features substance abuse.

Interestingly, the festival features a selection of "hard-boiled" movies rated 18 years and over.

But this is not something unprecedented; the Berlin Film Festival's youth section introduces adolescents to films portraying more mature, explicit themes. Maryanne Redpath, director of this section, said in a Korea Times interview last year while visiting SIYFF that this paves the way for intellectual debate about social issues among teens, and is thus a great way of challenging young minds.

The SIYFF presents nine short and feature-length films about individuals daring to go against conventional moral or social norms.

"Beautiful Boy" (United States, 2010), for example, is about how a couple must deal with the aftermath of a disaster, when their son commits suicide after a shooting rampage in college. Directed by Shawn Ku, the film won the International Federation of Film Critics (FIPRESCI) Award at last year's Toronto Film Festival and makes its local premiere through the festival.

Also worth seeing is "Boy" (2010) by local filmmaker Roh Hong-jin. The gritty, hyper-realistic drama is about a boy from an impoverished family. As his father is perennially unemployed and his mother tries to make ends meet, Jin-wu starts delivering newspapers in order to help out. Through the job, he meets the more "worldly" Chang-geun and is introduced to cigarettes, alcohol and sex, and eventually ends up in a bar where his mother works.

"Zoe" (2010) from Germany is about a young girl who engages in one meaningless sexual relationship after another in an attempt to suppress loneliness and anxiety. The eight-minute film, directed by Stephan Lengauer, makes its Asian premiere at SIYFF.

Also included are films that invite more proactive viewing from the audience: "Finis Operis", a 2011 short film by Moon Byung-gon that was invited to Cannes Critics' Week earlier this year, evokes curiosity from viewers as an old man breaks out a sweat trying to install something on the ceiling of his room on a rainy day. In "Babydoll" (Austria, 2010), a man and a woman are feverishly searching for something in a house while a child plays with a doll in her room. The 12-minute short also inspires the audience to try to figure out the relationship among these three characters.

The festival, which has served as a rite of passage for top local cineastes such as director Kang Woo-seok and actress Kim Bo-kyoung, invites many special guests this year.

Actor Lee Chun-hee (known through films such as Juhn Jai-hong's "Beautiful" and the TV program "Family Is Out!") and actress Kim Sae-ron, the young heroine of "The Man From Nowhere" starring Won Bin, are promoting the event as honorary ambassadors.

Prominent directors including Lee Joon-ik, who has helmed smash hits such as "King and the Clown" and Shin Terra, who recently made headlines for making the award-winning 3D film "11 a.m"., as well as popular actress Myung Se-bin will take part in the festivity.

"Youth film festival opens in Seoul Thursday"
by HanCinema is licensed under a Creative Commons Attribution-Share Alike 3.0 Unported License.
Based on a work from this source