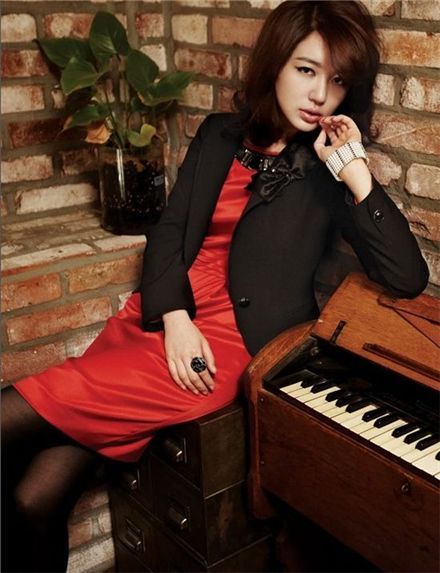 Korean actress Yoon Eun-hye has been chosen as the female lead of a Korean remake of the popular Hong Kong movie "Comrades, Almost a Love Story", according to the show's producer Verdi Media on Monday.

Yoon will be playing the role of Yoo Chae-hwa, a Korean residing in China, in the remake tentatively titled "Love Song - Drama" alongside Korean actor Park Yong-ha, an official at Verdi announced through a press release.

The official added that the actress' return to the small screen is already creating buzz not just domestically but also internationally -- Verdi has been receiving inquiries regarding the publication rights for "Love Song - Drama" since all of Yoon's previous works had been received favorably in Japan and other countries overseas.

"Comrades, Almost a Love Story", starring top Hong Kong actors Maggie Cheung and Leon Lei, was the top-grossing foreign film in Korea when it released in 1997. The movie is an epic love story between two Chinese mainlanders who meet and fall in love in Hong Kong.

The remake is set to begin shooting in late July and scheduled to hit the small screen at the end of the year.

Yoon Eun-hye made her debut as a member in the girl group Baby VOX in 1997. She has appeared in numerous variety shows and entertainment programs after leaving the group in 2005.

She rose to stardom after starring in the smash hit TV series "Princess Hours", "Coffee Prince" and in "My Fair Lady".

She is currently helping out children in Africa as a part of a UNICEF campaign titled "Never Alone" with SS501 member Kim Hyun-joong.

"Yoon Eun-hye as female star in TV remake of "Comrades, Almost a Love Story""
by HanCinema is licensed under a Creative Commons Attribution-Share Alike 3.0 Unported License.
Based on a work from this source