Yoo Seung-ho and Lee Je-hoon to come back 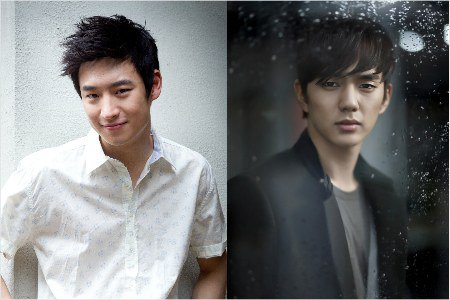 The Department of DefeNational Servicee clock goes around and around. Some actors in their 20s are done with service and will be coming back soon.

Yoo and Lee were the most standing out 20s actors when they decided to serve their country. Yoo Seung-ho, who started off young, attempted at a more mature genre of drama and successfully grew out of his childhood image through "Missing You" right before he joined National Service. It is highly anticipated how much more mature he'd be once he's done with duty.

Lee Je-hoon who was mostly seen in movies, dominated all the rookie awards with "Bleak Night" in 2010. He then starred in "Architecture 101" as an innocent college boy who falls in love and rose as the blue chip of Chungmuro. He is coming back with the SBS "Secret Door" once he is done with duty.

When Yoo Seung-ho and Lee Je-hoon come back, they are going to have some competition with actors who have been taking their place while they'd been gone such as, Lee Jong-suk, Kim Woo-bin, Joo Won and others.

Kim Woo-bin and Lee Jong-suk have claimed their places as actors with KBS 2TV drama "School 2013" and SBS "I Hear Your Voice" as well as "The Heirs". Joo Won is on his way with "Good Doctor" and the new "Cantabile Romance".

Kim Soo-hyun, Lee Min-ho and Lee Seung-gi who are at the peak of their fame at the moment, are also working hard to build their careers. Kim Soo-hyun and Lee Min-ho are currently Hallyu stars who dominate China.

"Yoo Seung-ho and Lee Je-hoon to come back"
by HanCinema is licensed under a Creative Commons Attribution-Share Alike 3.0 Unported License.
Based on a work from this source