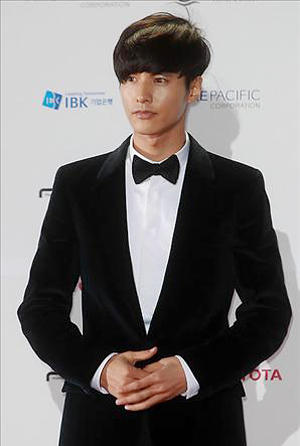 Gallup Korea conducted a survey to select the "Actor of the Year", and Won Bin has been chosen as the best actor for two years in a row. Gallup Korea said on December 22 that they had conducted a survey with 1,728 respondents from both men and women aged 13 or older across the nation from November 18 until December 6 to ask the best movie star of the year, and Won Bin obtained 11.3 percent of the votes. Gallup Korea let the respondents select two actors and counted the total votes.

Won Bin obtained explosive popularity with his appearance in the movie "The Man From Nowhere" last year, and he received the greatest support again even though he did not appear in any movie this year. Actor Park Hae-il, who appeared in the movie "Arrow, The Ultimate Weapon", has been ranked second by obtaining 9.5 percent of the votes. According to the Gallup's analysis, the handsome actor Won Bin received great support from teenagers (24.3%) and the twenty-somethings (18.4%), and the actor Park Hae-il with a friendly image obtained great support from the thirty-somethings (17.7%) and the forty-somethings (10.6%). Actor Jang Dong-gun, who was listed second, dropped to third, but he is the only actor who has been included in the top five for four consecutive years. Actress Kim Ha-neul, who played the role of a blind woman in the movie "Blind", ranked in fourth place by obtaining 8.2 percent of the votes, and the actor Gong Yoo, who presented excellent acting in "Silenced", ranked in fifth place by obtaining 5.8 percent of the votes.

"Won Bin Becomes 'Actor of the Year' for Two Consecutive Years "
by HanCinema is licensed under a Creative Commons Attribution-Share Alike 3.0 Unported License.
Based on a work from this source