Why do middle aged actresses come back as mothers or strong wives? 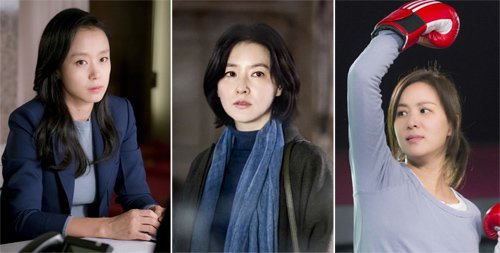 The agents don't really like their characters. They all have husbands that don't care and have affairs with someone else but the women are all 'good wives' or "The Perfect Wife" or 'Saimdang'. They are in different situations but they aren't lonely or sad, instead they just accept the reality and stand against it.

They used to be such beautiful characters in their 20s but now that they are in their 40s, they have come down to more realistic characters.

Kim Eun-yeong, a critic of popular culture had something convincing to say about this phenomenon. "To a woman in her 20s, the existence of a husband has no affect in explaining the attraction of a woman. On the other hand, to a woman in her 40s, having a husband or a boyfriend is one way of showing how appealing she is. It's a stereotype fixed in our society".

To an actress who has to act out a woman in her 40s, the option of having a husband means that her character is that much more appealing. One thing the Korean society wants from a middle aged woman is to be someone's wife or mother.

Then, can't they be a cooler wife or mother? These actresses were 'wannabe stars' to the 30s and 40s. When they were in their 20s they were in romance and in their 40s, do they have to be such tough married women?

Experts say there is tactical judgment behind this. A director said, "If a woman in a drama is in her 40s but is single, she will be called 'Gold Miss'. However, if she is someone's wife or mother, there is more to deal with. The loser husband makes the tough wife shine. It's a win-win on both sides".

During their 10 years of absence, these actresses were in commercials and maintained their 'luxury' images to make a winning move. Although they've been away for so long, they are still top stars in people's memories. They have to be someone the viewers can relate to easily and being a mother or a wife makes it easier.

There is objection to this too. "How long do actresses have to pretend to be like oxygen? Unlike the past, it's very appealing for a married woman character who is successful at balancing family and work".

Working mother Kim Min-joo said, "Ko So-young is good, but it was awkward seeing her in this character because I remember her from the past". The first episode of Ko So-young's drama was 3.9%. Lee Young-ae's "Saimdang: Light's Diary" is also dropping out of the loop.

Some may say that an actress in her 40s acting that age might not be strange at all but it is definitely disappointing.

"Why do middle aged actresses come back as mothers or strong wives?"
by HanCinema is licensed under a Creative Commons Attribution-Share Alike 3.0 Unported License.
Based on a work from this source