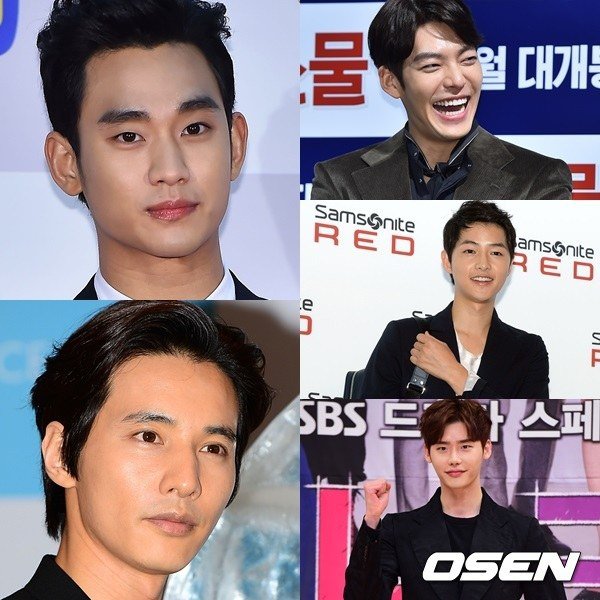 It looks like it's time to rewrite the list of the '4 kings of Hallyu'. The original 'kings' Lee Byung-hun, Jang Dong-gun, Song Seung-heon and Won Bin are now in their 40s and are either taken (Lee Byung-hun and Jang Dong-gun) or confined to their girlfriends (Won Bin).

The original '4 kings' come from Hong Kong. The Hong Kong movie industry reached its peak in the 1980s and actors like Cheung Hok Yau (Jacky Cheung), Andy Lau, Aaron Kwok and Hacken Lee dominated the 1990s. The Hong Kong media nicknamed them 'the 4 kings' and their work spread out all over Asia.

The '4 kings' were on mixed diets taking on anything from comedy, action or mellow and they were even active as singers with albums and concerts like any typical Hong Kong celebrity at the time.

On the other hand, the '4 kings of Hallyu' are picky about what they do. It seems as though the reason why Korean films caused so much influence in the Asian region since the year 2000 is because of their strong image and vitality that's been coming down from the first generation of kings.

Then what are the new 'kings' preparing for now? Right now, there are only speculations of what they might or might not do. Kim Soo-hyun, after making his big success with "My Love from the Star" was assumed to have been chosen for the 20 billion won blockbuster "Kwon Bob" but he refused and is currently swimming in other offers. Kim Soo-hyun is currently contemplating between KBS 2TV "Producers" and MBC "Scholar Who Walks the Night".

Lee Min-ho who successfully made his screen debut through director Yoo Ha's third street movie, is currently taking a break. Kim Woo-bin who guarantees at least 2 million audiences with his name alone has been offered a role in the Hong Sisters' newest "The Jejudo Gatsby". However, he's just looking through and nothing has been confirmed yet. If he decides to do it, it will be a year and 5 months since his most recent "The Heirs".

Lee Jong-suk hit 4 home runs with "School 2013", "I Hear Your Voice", "Doctor Stranger" and "Pinocchio" so obviously everyone wants to know what he's doing next. Apparently he's being offered work from China and he's looking positively at them. He bases his decisions on good scenario and good characters.

"What's next for Kim Soo-hyun, Lee Min-ho, Kim Woo-bin and Lee Jong-suk?"
by HanCinema is licensed under a Creative Commons Attribution-Share Alike 3.0 Unported License.
Based on a work from this source