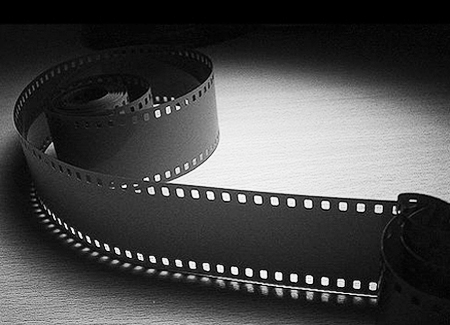 A strip of 35-millimeter celluloid film, which has mostly been replaced by digital cinema / Korea Times file

The cinematic experience is more than about whether the plotline is appealing. The technical aspects of the audiovisuals often determine the overall aesthetics, of how one perceives the content. Sometimes the film itself is deliberately produced to capture the nostalgia of the past. Michel Hazanavicius' "The Artist" (2011) pays direct homage to early 20th-century silent movies while Quentin Tarantino's signature visual style displays an adoration of old, dust-streaked images. In 2008, Ryoo Seung-wan experimented with old-fashioned dubbing for his retro action flick "Dachimawa Lee".

There is something quaintly charming about decades-old movies. They are, moreover, an important part of cultural heritage.

"According to FIAF's (International Federation of Film Archive) code of ethics, archives are responsible for showing movies to people and to protect and pass on this heritage to the next generation - in the best possible representation of the works of their original creators", said Kim Bong-young, head of the Korean Film Archive's (KOFA) Film Conservation Center in Sangam-dong, northwestern Seoul.

"Flawless visuals are great, but I believe there is also something beautiful about tainted, moldy films", said Kim Kiho, an archivist at the center. Here, fans can enjoy old films on the big screen or at personal screening stations. But before introducing works available for viewing, The Korea Times took a peek into the art of film restoration.

Damaged films are like patients awaiting treatment at the hospital, or in this case the conservation lab.

Restoration and digitization - converting analogue film to digital format - are complex procedures: removing foreign material from the film, stabilizing shakiness or reducing scratches, noise and dust, as well as altering the color.

"We archivists must make a lot of tricky decisions. A lot of early films were made under poor lighting conditions, where night scenes were shot during the day and such. Often more than two types film were patched up for a given movie and thus different portions of the film are tarnished to varying degrees over time", said Kim Kiho.

Color grading, or color correction as it's more commonly known, requires weighing various factors. Sometimes the film's original cinematographers may be available for consultation, but they may want the archivist to change the color according to how they may have wanted it to look like rather than how it originally was. 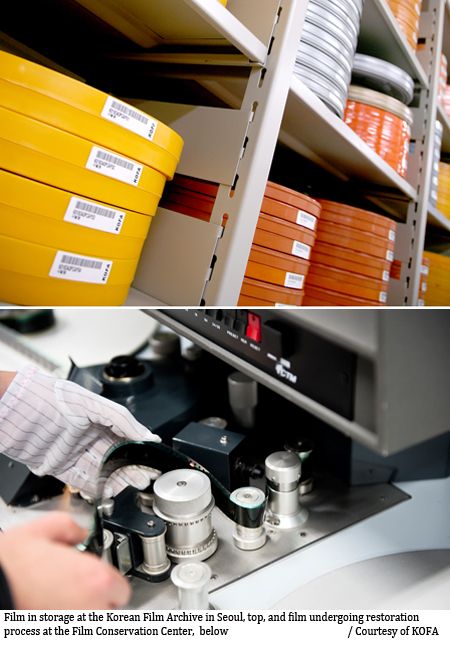 "It takes a lot of trial and error, and digital restoration of old movies is still relatively new in Korea. We hope people can value the importance of old movies as a cultural heritage and that they can take interest in watching them, in the spirit of enjoying a more diverse audiovisual experience", said Kim.

After undergoing careful restoration, films are catalogued and stored at temperature- and humidity-controlled, safe-lock chambers. Thousands of round tin cans storing films (about five are devoted to a single full-length feature film) occupy the space.

There is a separate room designated for "exclusive material" - North Korean pictures. Those wanting access to these films must file a written request, which, if approved, can be seen at KOFA's viewing room.

KOFA, a state-supported organization, restores and digitizes some 30 films per year. It is also devoted to collecting lost or rare Korean films scattered overseas. Most notably, Shin Sang-ok's "Bound by Chastity Rules" (1962) was found in Taiwan several years ago while Kim Ki-young's "The Boxes of Death" (1955) found its way back home from the United States last year.

"Chastity Rules" proved to be a successful first-time venture for local archivists in 2006-2007, ever since the concept of digital film restoration was introduced here in the mid-1990s. A partially restored copy of the movie premiered at the Busan Film Festival in 2006 before being invited to the Cannes Film Festival in 2007. 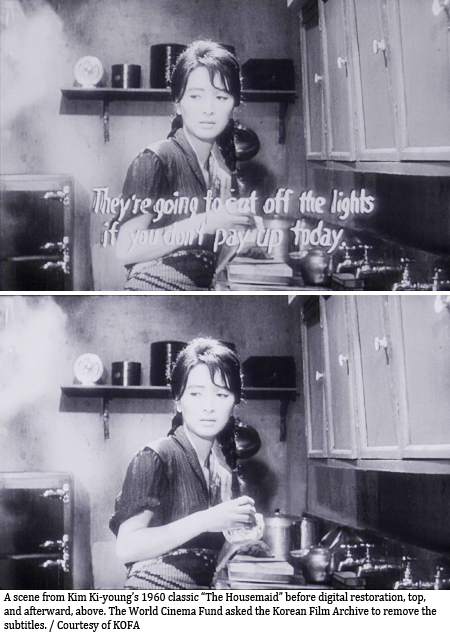 "That this intensely, even passionately claustrophobic film is known only to the most devoted film lovers in the West is one of the great accidents of film history", says Scorsese, who ranks "The Housemaid - 2010" among the top three films of all time. In 2009, Shin's 1961 "Prince Yeonsan" was also screened at the prestigious French festival.

Posters and brochures of local movies are also kept at KOFA. The oldest poster that is stored there after undergoing deoxidation is for the 1932 "A Ferry Boat That Has No Owner" by Lee Gyu-hwan.

It also runs an online video-on-demand service that allows access to 400 early Korean films, 36 animations and 37 independent works. This month, 11 films by Kim Ki-young, including his iconic "The Housemaid - 1960", are available for free. Visit www.kmdb.or.kr/vod (Korean only). Several Korean cultural centers overseas such as the one in New York offer this Internet service.

In May, KOFA plans on hosting a film festival of restored films at its Cinematheque. The same month, some 70 early English-subtitled Korean movies will become available on video-sharing site YouTube. For more information, visit www.koreafilm.or.kr (Korean and English).

"[Weekender] Restoring classics"
by HanCinema is licensed under a Creative Commons Attribution-Share Alike 3.0 Unported License.
Based on a work from this source