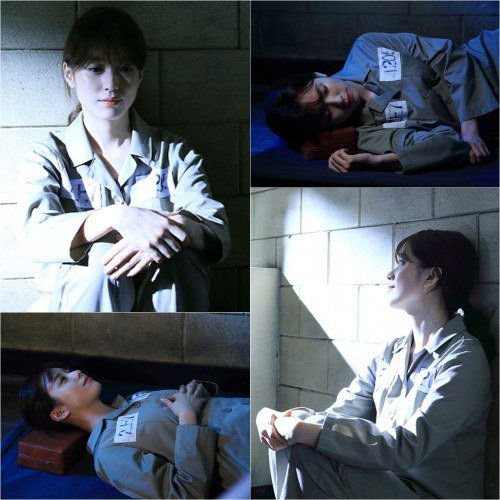 The new MBC drama "W" released stills on Han Hyo-joo locked up in a cell.

Her expression reads complications and subtlety. She doesn't look scared of tense but she looks like she's thinking about something and is smiling peacefully.

In the previous episode of "W", Oh Yeon-joo pleaded her father Oh Seong-moo's (Kim Eui-sung) student Park Soo-bong (Lee Si-eon) to let Kang Cheol (Lee Jong-suk) live as he was going to make the final episode of "W". Yeon-joo saw Kang Cheol in the river waters and realized that the word 'end' actually meant 'continue' and she could save Kang Cheol.

She pleaded to Soo-bong to continue with "W" and just before he could say anything, she got sucked into the comic and ended up in the meeting room at the detention center she last met Kang Cheol.

"W" is popular for its twists and has been in the lead for five continuous episodes. Stills from the sixth episode are spicing things up for the seventh episode.

""W" Han Hyo-joo spotted alone in her cell "
by HanCinema is licensed under a Creative Commons Attribution-Share Alike 3.0 Unported License.
Based on a work from this source