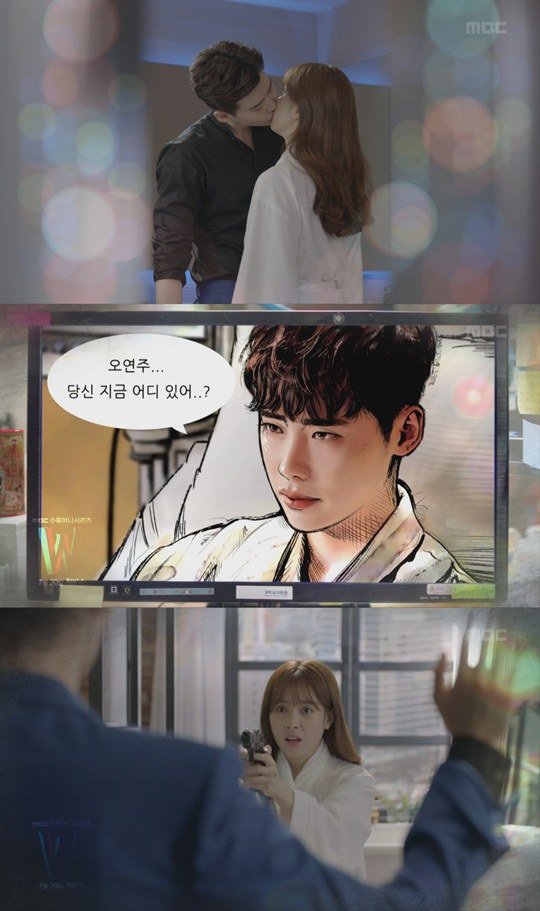 The new MBC drama "W" released a second teaser on the 13th with the first episode of the drama coming up soon.

This teaser shows the main characters kissing in a realistic and comic world, raising anticipation for the drama.

Oh Yeon-joo (Han Hyo-joo) doesn't know where she is and she meets Kang Cheol for the first time while he's covered in blood. Kang Cheol's assistant Yoon So-hee (Jung Yoo-jin) suspects Oh Yeon-joo and Kang Cheol is looking for her. Then there's the kiss scene and Kang Cheol's accident scene. Oh Seong-moo's voice appears later and says, "Today is going to be the final episode".

Kang Cheol says, "I think this woman has the key to my life. Oh Yeon-joo, who are you?" and Oh Yeon-joo cries "You don't know what's going to happen" somewhere along the way in the teaser.

"W" is being released on the 20th. It is a realistic and fantasy story about Oh Yeon-joo getting sucked into the web-toon world and meeting Kang Cheol, the main character of her father's work. The fact that Kang Cheol is a web-toon character is unique itself and the coming together of two worlds will bring visual satisfaction.

"W" is written by Song Jae-jeong and directed by Jeong Dae-yoon.

"[Video] "W" Han Hyo-joo and Lee Jong-suk's kiss scene teaser"
by HanCinema is licensed under a Creative Commons Attribution-Share Alike 3.0 Unported License.
Based on a work from this source