[Video] Gong Yoo makes a formal deep bow to say goodbye to his fans, "I won't be long". 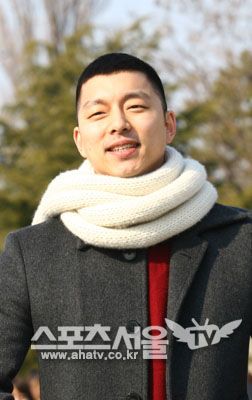 On 14th, the front gate of Chung-nam Non-san Military training center was flooded with 300 fans and a number of TV crews who came to see Gong Yoo off. Despite the cold temperature below zero, the fans came from all over the country and waited for his arrival from dawn. And about 100 middle-aged female fans have come from Japan, showing his rising popularity among Asian countries.

Gong Yoo seemed to be awkward with his short hair, keeping touching it with shy smile. He said, "I feel light-hearted, though I'm quite embarrassed to enter the military service at such late age. I worried a lot about today, but this morning I just felt so light-hearted and free. I will enjoy the next 2 years as if I'm shooing a blockbuster movie. I just hope the war wouldn't breakout while I'm at it".

Then he walked to his fan and made a formal deep bow to them saying the last good bye. Thereupon the 300 fans became tearful and Goog Yoo was close to tears also but kept smiled until the end. In his final statement, he said, "I'd like thank those who showed such huge interest and affection toward "Coffee Prince" and I also like to recognise a big thank you to all my fans who loved me so much until now. Thanks you so much. I won't be long. Don't worry about me. I wish the world become more beautiful place after 2 years". And then he entered the training center.

After 5 weeks of basic military training, Gong Yoo will be serving in the military for next 2 years.

"[Video] Gong Yoo makes a formal deep bow to say goodbye to his fans, "I won't be long"."
by HanCinema is licensed under a Creative Commons Attribution-Share Alike 3.0 Unported License.
Based on a work from this source