Verdict Is Out on Lee Da-hee's Breakthrough in Courtroom Drama 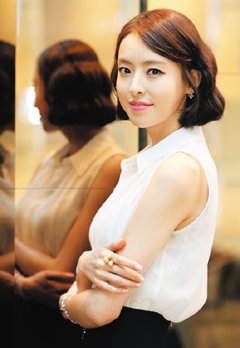 The SBS drama "I Hear Your Voice" is receiving rave write-ups and high viewer ratings for its neat blend of courtroom drama, romance, thriller and fantasy. In the show, actress Lee Da-hee has made something of a comeback by portraying a seemingly cold prosecutor whose character changes dramatically as the narrative develops.

The Chosun Ilbo met Lee in southern Seoul's trendy Cheongdam neighborhood on Wednesday to discuss the renascent blossoming of her career and its impact on her life. "When I went to a restaurant the other day, the owner recognized me. It was first time since I debuted 11 years ago that a stranger recognized me as a celebrity. Some people even say that a great new actress has appeared", she said with a bashful smile.

At the age of 17, Lee made it to the final of the 2002 Super Elite Model Contest. She has played supporting roles in several dramas and films since then, but most of the time the dramas or movies were quickly forgotten, or she was overshadowed by her cast members and subsequently shunted into the side wings.

"I was desperate and badly needed a turning point in my acting career before it was too late. I tried many times to get the role I wanted on 'I Hear Your Voice' and finally my perseverance paid off", she said.

"Prior to that, I was feeling very frustrated by all the long interludes between finding work, and I couldn't understand why I kept getting rejected for parts. But now I know the reason why -- I knew nothing about acting. Now I realize how much I still have to learn about this craft", she added.

As Netizens pore over her career and post catty comments about her shortcomings as well as positive predictions for her future, Lee said it's important to take all feedback with a pinch of salt.

"I don't really get stressed out about it", she said. "It's a kind of expression of interest. For now, I think getting hateful comments is better than getting nothing at all".

"Verdict Is Out on Lee Da-hee's Breakthrough in Courtroom Drama"
by HanCinema is licensed under a Creative Commons Attribution-Share Alike 3.0 Unported License.
Based on a work from this source