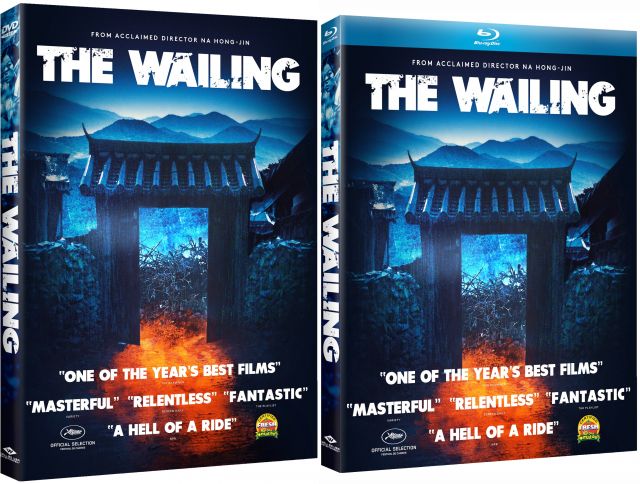 Suspicion leads to hysteria when rural villagers link a series of brutal murders to the arrival of a mysterious stranger in the supernatural thriller "The Wailing", debuting on digital September 6, and on Blu-ray™ and DVD October 4 from Well Go USA Entertainment. Over six years in the making, director Na Hong-jin's meticulously crafted follow-up to the globally acclaimed films "The Yellow Sea" and "The Chaser" smashed box office records upon its debut in South Korea, where fans made many return viewings in order to catch new clues and debate what's sure to be the most talked-about ending of 2016. "The Wailing" stars Kwak Do-won ("The Man From Nowhere"), Hwang Jung-min (New World), Jun Kunimura (Kill Bill: Vol: 1 & 2) and Chun Woo-hee ("The Beauty Inside"). Certified Fresh on Rotten Tomatoes with a 100% rating, "The Wailing" won the PRIX AQCC (Association québécoise des critiques de cinéma) at the 2016 Fantasia International Film Festival.

Synopsis:
In this unbelievably tense supernatural thriller, a foreigner's mysterious appearance in a quiet, rural village causes suspicion among the locals - suspicion which quickly turns to hysteria as the townspeople begin killing each other in brutal outbursts for seemingly no reason. As the investigating officer watches his daughter fall under the same savage spell, he agrees to consult a shaman for answers - unknowingly escalating the situation into something far more dangerous.

Available on DVD, Blu-ray and Online from Amazon

Winners must be located in the USA. 5 copies to be won. First-come, first-served basis.

To win the Blu-ray please send us your name and address here : hancinema.net/message.php

"[USA] "The Wailing" Available on DVD and Blu-ray + ***Blu-ray Giveaway*** First-come, First-served"
by HanCinema is licensed under a Creative Commons Attribution-Share Alike 3.0 Unported License.
Based on a work from this source