[USA + Canada] GKIDS and Shout! Factory Present "The Satellite Girl and Milk Cow" on Blu-ray/DVD and DDVD on June 5, 2018 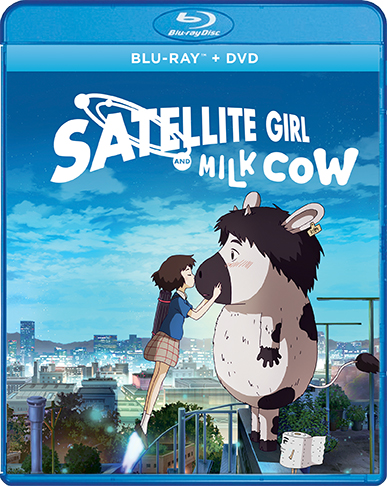 The debut feature-length film from Korean director Jang Hyeong-yoon, acclaimed creator of animated short films that have premiered and won prizes at festivals worldwide, the highly original "The Satellite Girl and Milk Cow" was produced by Jo Young-gak ("The Fake", "King of Pigs"), and received an Asia Pacific Screen Award nomination for Best Animated Feature.

An out of commission satellite picks up a lovelorn ballad on her radio antenna and descends to Earth to find the source of such sincere emotions. But on the way she is caught in a raging magical battle and transforms into Satellite Girl, complete with rocket shoes and weapon-firing limbs. Meanwhile, the balladeer in question  a loser twentysomething at a café open mic  meets the fate that befalls all broken-hearted lovers: he is turned into a farm animal. But love knows no bounds, and aided by the wise and powerful Merlin  a wizard who has been turned into a roll of toilet paper  our duo must evade the all-consuming incinerator monster, the wily pig witch, and other nefarious adversaries in an attempt to be together.