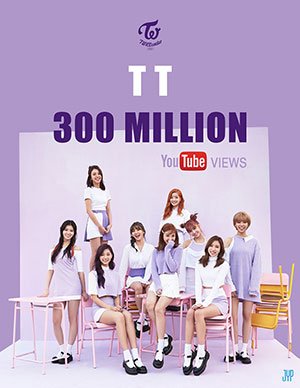 The music video for girl group TWICE's "TT" garnered more than 300 million clicks on YouTube as of last week.

The video surpassed 200 million views in May after its release in October last year.

They became the first K-pop act to have six music videos attract over 100 million viewers each.

The music video for their recent single "Heart Shaker", which was released early this month, already reached almost 5 million views as of last week.

"TWICE's Hit Song Reaches 300 Million Views on YouTube"
by HanCinema is licensed under a Creative Commons Attribution-Share Alike 3.0 Unported License.
Based on a work from this source