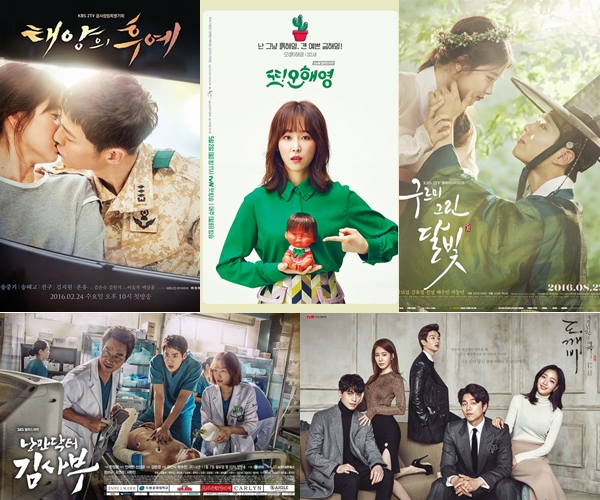 There were more popular dramas to release this year than the years before and many cable broadcast companies were successful as well.

tvN beat mainstream broadcast companies and hit an all-time high of 38.8% viewer ratings with a mini-series.

May and June were taken over by "Oh Hae-Young Again" with its romantic comedy theme. Seo Hyun-jin and Jeon Hye-bin had viewers laughing and crying with the actors. The last episode had high viewer ratings as well.

Next comes "The Sun and the Moon" with Park Bo-gum and Kim Yoo-jung. These two young actors showed great quality acting in the historical drama.

Most recently is SBS "Dr. Romantic" which features Yoo Yeon-seok and Seo Hyun-jin. This medical drama shows a mixture of hope, growth and love. The viewer ratings have been high for its time slot and is continuing to increase with each passing week.

tvN is on a winning streak for dramas this year. Their newest drama, "Goblin", has been hit the record for the highest viewer rating in just 2 weeks. They aired a special 90 minute episode for the first three episodes and captured the viewer's attention.

With the standard and quality of dramas rising, many are anticipating next year's releases as well.

"Top 5 Dramas that Took Over 2016"
by HanCinema is licensed under a Creative Commons Attribution-Share Alike 3.0 Unported License.
Based on a work from this source