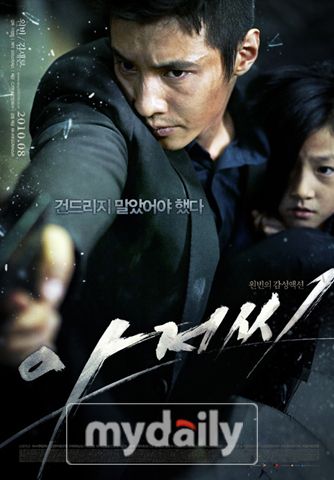 'The Man From Nowhere', a movie starring Won Bin, going to reach 6,000,000 viewers until today, for sure. This splendid achievement happened after 9 weeks from the opening of the movie.

Viewers were counted by Korean Film Council, who says that ‘The Man From Nowhere’ which had its opening on August 4th, had been drawn about 5,978,500 viewers until 25th. It only need 20,000 more viewers until 6 million.

Since 25th alone reached exactly 38,611 viewers, it would not be a problem for this movie to reach 6 million viewers until 26th.

‘The Man From Nowhere, which is Won Bin’s first solo starring movie, is in first place for this year’s movies, beating ‘Secret Reunion’ and ‘Inception’.

This movie’s hit element is the fact that this is not simply an action movie, but has heartwarming story between ‘The Man’, Tae-sik (Won Bin) and the girl next door, So-mi (Kim Sae-ron) in it; of course it also has ‘pretty boy’ Won Bin’s breathtaking action scenes.

‘The Man From Nowhere,’ the first movie in 2010 that drew more than 6 million viewers is also drawing everybody’s attention to its final score as well as many viewers.

"Today, Won Bin's 'The Man From Nowhere' going to reach 6,000,000 viewers"
by HanCinema is licensed under a Creative Commons Attribution-Share Alike 3.0 Unported License.
Based on a work from this source