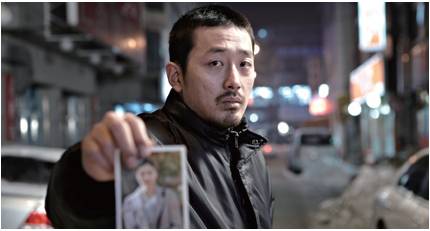 The success of "The Chaser" has lingered in the aftermath for a long time. Since the huge hit of "The Chaser" , a number of thriller genre films, "The Man From Nowhere", " I Saw Devil" and "The Unjust" have been introduced and the desire of directors and actors on making a firmer and stronger films has been a trend in the Korean industry. And "The Yellow Sea" seems to complete the trend and flow in the industry at peak done by Na Hong-jin himself, who started the trend.

Gu-nam (Ha Jung-woo) who drives a taxi in Yanbian, China, living in a desperate situation with debts and a wife who went to Korea 6 months ago to earn money. Meeting Myun (Kim Yun-seok) at a gambling room, Gu-nam is offered a job to kill a man in Korea which will pay off his debt. So he decides to cross the Yellow Sea in hopes of finding his wife and paying off his debt. From then on, the storyline goes almost into real time as similar as NA did in his debut film "The Chaser" . While Jung-ho runs through the city nightlong to stop a murder in "The Chaser" , "The Yellow Sea" follows Gu-nam practicing several times for planning his hit and chasing the traces of his wife at the same time almost in real time. So, the tension increased by employing the real time technique is one of the crucial elements making up NA's style.

The most different aspect between "The Chaser" and "The Yellow Sea" or the most impressive virtue of "The Yellow Sea" is a unfamiliarized viewpoint. Gu-nam has no longing to go to Korea, no relatives or memories, and doesn't even listen to Korean music. No sense of belonging to his "Homeland" and Korea is a just dirty land to him, where his innocent wife got lured and into having an affair.

So, compelling violent scenes in the film are not horrible moments, rather, the most horrible moment is the bewildered feeling of desolation when he looks up a map to find a way to Ulsan, a Southern city of korea in the mountain covered with snow as being chased by police. The film follows how Gu-nam changes in a desperate situation and adapts to it to survive. Who else would treat their characters with as much brutality? "The Yellow Sea" goes the full distance.