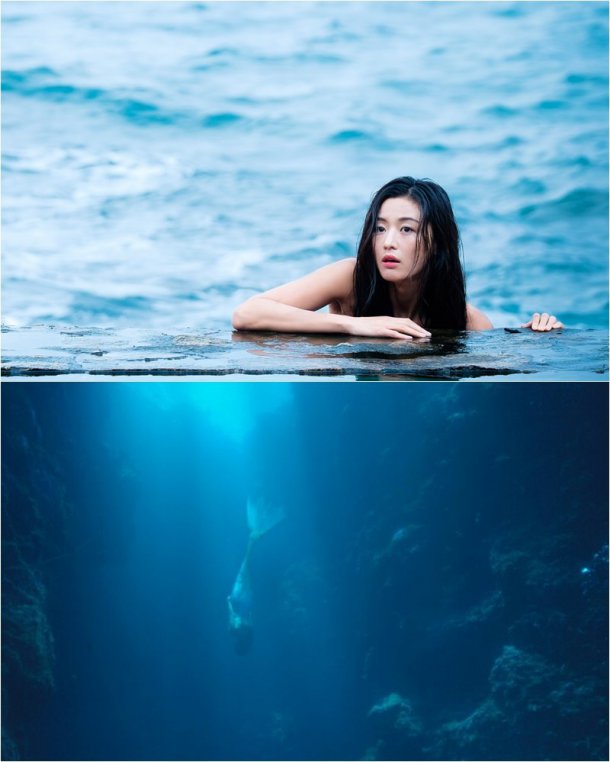 Jun Ji-hyun turns into a mermaid in "The Legend of the Blue Sea".

The stills of the mermaid were released on the 4th and it's grabbing everyone's attention.

"The Legend of the Blue Sea" is the story of the last mermaid on earth meeting a genius fraud on land and getting used to life in the city. The drama goes back and forth the present and the past.

The teaser that was released recently showed Jun Ji-hyun as a mermaid. The stills satisfied fans who are patiently waiting and it's increased the hype even more.

Jun Ji-hyun the mermaid is swimming in the deep sea. She is perfect for the role and is the closest thing to a mysterious mermaid we have always imagined.

Jun Ji-hyun was applauded for her newest challenge and that itself is a beautiful thing.

"The Legend of the Blue Sea" sources say Jun Ji-hyun's professionalism made the mermaid character happen and not just her appearance. The underwater shoot was hard but she pulled it off, helped by all staff and crew on set.

Meanwhile, "The Legend of the Blue Sea" will be released on the 16th of November.

""The Legend of the Blue Sea" Jun Ji-hyun fit for the role "
by HanCinema is licensed under a Creative Commons Attribution-Share Alike 3.0 Unported License.
Based on a work from this source