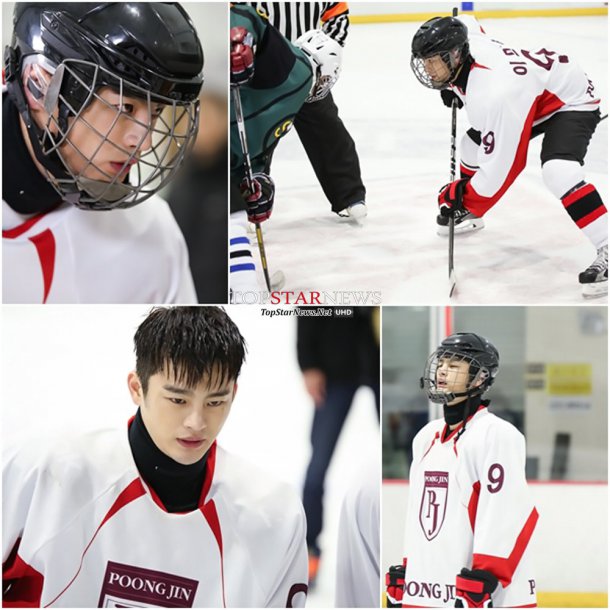 New tvN drama "The King of High School Manners" is expected to be an exciting drama that will blow away the heat.

Newest romance comedy "The King of High School Manners" is about the turn of events that take place when a high school student is made an executive of a major firm. Many are looking forward for this drama's first broadcast, which is on the 16th of June.

In the role of Lee Min-seok, student and ice hockey player of Poongjin High is Seo In-guk. An image cut of him gives the whiff of a wild sports player who might weaken the knees of several women. Seo In-guk is in the middle of a hockey game, showing beads of sweat coming down with heavy breathing. This is very different from the innocent image seen in "Answer Me 1997", which he played as Yoon Yoon-je. Watching him compete for victory on the ice will be one of the many things to see in this drama.

Seo In-guk took two months worth of lessons in hockey from national athlete Ahn Geun-yeong and the Gwangundae hockey team.

"The King of High School Manners" crew says, "Seo In-guk likes working out and he's a very refined sports player, so there wasn't much trouble although he's physically exhausted because of the long hours of filming in that heavy suit. However, thanks to his hard work, we have enough footage for us to say that we are satisfied".

Meanwhile, a teaser for "The King of High School Manners" was released in the official homepage http://youtu.be/tYjx1MCFfII which is expected to raise anticipation for the drama.

"The King of High School Manners" will be broadcasted on the 16th.

""The King of High School Manners" Seo In-guk on the ice"
by HanCinema is licensed under a Creative Commons Attribution-Share Alike 3.0 Unported License.
Based on a work from this source