No matter how much time has passed, important friends and friendship don't change. It's the same for Sports Seoul, which has cried and laughed with its readers for 23 years. The stars who covered the pages of Sports Seoul also stayed with the readers. June 22 1985. Let's take a look at the stars who have grown after the first publication of Sports Seoul.

Hwang Shin-hye, who rose to stardom with 1986 MBC drama "First Love", had perfect looks to the point that she was called a 'computer beauty'. Although it's been 20 years since her debut, she still shows off her beauty and perfect body with a fitness video and photo shoots. You can't find any indication that 23 years have passed, and the only thing old about her previous picture is her hairstyle.

Ha Hee-ra, who rose to stardom with 1984 KBS drama "High School Diary", was a teenage star like present-day Moon Geun-young. She had many youth fans, but with "Bonanza", she broadened her fan-base to middle-aged fans. She looks the same, almost as if her picture from 23 years ago is her twin.

Choi Myeong-gil, who entered the entertainment industry as an official MBC actor in 1981, became a top star after receiving awards in 1986 with the movie "Fog Column". She is currently in many historical dramas and has been called the 'queen of historical dramas'. In Sports Seoul's gallery, she shows off her sexy charm.

Chae Shi-ra also was born on "High School Diary" along with Ha Hee-ra. In 1984, she showed a mature charm unlike a sixteen-year-old student in a Ghana Chocolate commercial. She also appeared in "Eyes of Dawn" and "The Moon of Seoul". Chae Shi-ra's picture from 23 years ago shows a cute pose, but her face is the same.

Bae Jong-ok debuted in 1985, the same year Sports Seoul was first published, as a KBS actress. Recently, she is starring in "Park Jung-geum, Heavenly Beauty" and doing action scenes despite her age.

Choi Jae-sung, who debuted in 1985, was also a member of the dream team in "School Girl Diary" with Ha Hee-ra and Chae Shi-ra. He appeared with Chae Shi-ra again in "Eyes of Dawn". He acted as a Thai gang leader in "Time Between Dog and Wolf - Drama" and showed matured acting, but 23 years ago, he was a teenage star with cute charm.

Son Chang-min, who was a child actor, shook the hearts of many female fans in the mid-80s with his chiseled features. The innocent image in his picture from 23 years ago compares to the comfortable image he has today.

Lee Mi-yeon debuted in the mid-80s with "Love is a Blooming Tree" and was received well by many teenagers. Presently, she is representing actresses in their 30s, keeping her spot at the top through movies, dramas, and commercials. Her picture from before has the same charming beauty and bright smile. 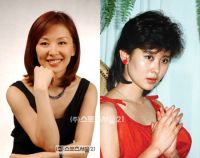 Lee Mi-sook won many awards as the lead role in movies such as "That Winter was Warm", "Whale Hunting", "Mulberry", and "Winter Wanderer". Although she is middle-aged, she is appearing in movies and dramas with her charming body.

Kim Hye-soo, who had an innocent look in the past, is now a big glamour star in the movies. With her sharp features and her bright smile, she has unchanged.

Kim Hee-ae appeared in KBS drama "Woman's Heart" as high school student Song Da-yeong in 1985 and rose like a star. She is now a mother of two children but still confirms her fan-base with her matured acting and consistent appearances.

Kang Soo-yeon, who was active from a young age, was recognized as a teenage star through "High School Diary", and became a world star in 1987 with the movie "Shi Ba-ji". She also has a beautiful shoulder line which makes her most suitable for the tradition Korean dress. Even now, she appears at various film festivals and keeps her spot in the central axis of the movie industry.

"Teenage stars into 'dignified' actors"
by HanCinema is licensed under a Creative Commons Attribution-Share Alike 3.0 Unported License.
Based on a work from this source