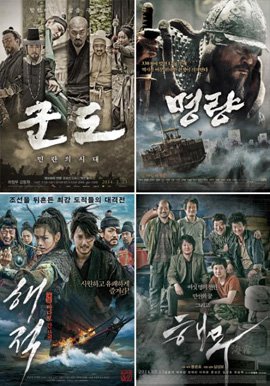 Four Korean blockbusters are expected to set up a box office war as many filmgoers try to beat the summer heat in cinemas.

"KUNDO : Age of the Rampant", "Roaring Currents" and "Pirates" all cost as much as W15 billion to produce, while "Haemoo" had a slightly lower budget of some W10 billion.

But it remains to be seen whether each of these films can draw enough viewers to make the break-even point.

"KUNDO : Age of the Rampant" had fans' attention even before release due to the star power of Ha Jung-woo and Gang Dong-won. Interesting plot details will keep fans entertained, and it attracted 550,000 on its first day in theaters. But disappointingly, it lacks a solid clincher.

"Roaring Currents" focuses solely on the main character, whose story should be popular with middle-aged to senior citizens and parents with children. It is a serious affair for much of its 128-minute running time, including a realistic but drawn-out 61-minute battle scene.

Son Ye-jin and Kim Nam-gil contribute almost nothing to "Pirates", which seems to try to earn laughs from viewers from beginning to end. The film will only appeal to teenagers or others interested in a couple hours of fluffy entertainment.

"Haemoo" has received relatively little attention, but it is drawing the spotlight recently as it has become known that director Bong Joon-ho of "Snowpiercer" was involved in its production.

"It is a well-made movie. Park Yoo-chun's debut performance has beat expectations", one film critic said. But the film is rated R, restricting its potential fan base.

"Summer Blockbusters Heat Up Box Office"
by HanCinema is licensed under a Creative Commons Attribution-Share Alike 3.0 Unported License.
Based on a work from this source