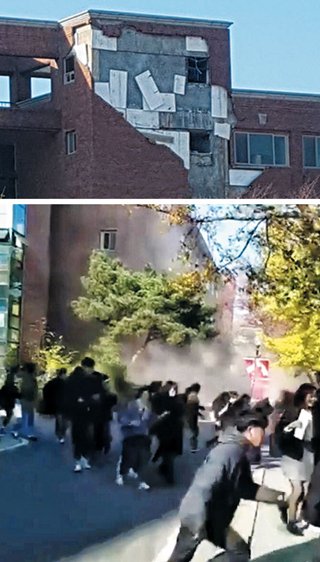 Students evacuate amid debris (top) from a building at Handong Global University in Pohang, North Gyeongsang Province on Wednesday. /Yonhap

A 5.4 magnitude earthquake struck the southeastern port city of Pohang on Wednesday.

It was the second-largest quake to hit the Korean Peninsula on record and happened just over a year after a 5.8 magnitude quake rocked Gyeongju.

The Korea Meteorological Administration said the quake was centered in an area around 9 km north of Pohang at a depth of only 8 km underground.

It happened just 43 km away from the tremor that shook Gyeongju and was followed by 30 aftershocks measuring between 2.0 to 4.3 in magnitude occurred until 10 p.m. Wednesday night.

Although the earthquake had only a quarter of the strength of the Gyeongju tremor, it was shallower and resulted in about the same amount of damage.

Handong Global University, which is close to the epicenter, suffered damage to the wall of a building, while staff at Samsung and LG plants in Gumi, North Gyeongsang Province were temporarily evacuated.

President Moon Jae-in convened a meeting of senior officials and was briefed on the situation as soon as he returned from a Southeast Asia trip.

"Strong Earthquake Rattles Southeastern Korea"
by HanCinema is licensed under a Creative Commons Attribution-Share Alike 3.0 Unported License.
Based on a work from this source