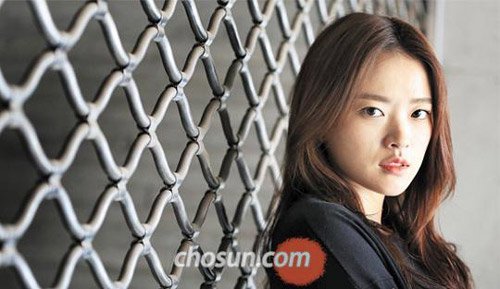 Actress Chun Woo-hee played a rebellious teenager in "Sunny - 2010" (2011) and a breadwinner looking after her younger sister instead of her errant father in "Thread of Lies" (2014). In "Han Gong-ju" (2014) Cheon takes on the even more daunting role of a high school girl who is gang-raped by her male peers.

"I sometimes regretted that I couldn't get my career going in an easier way as I kept getting offered complicated characters with hard lives who were difficult to portray. But I now believe that I was chosen because I have the ability to act well and deliver the right message", said Cheon.

"Han Gong-ju", directed by Lee Su-jin, was inspired by the true story of a middle school girl who was raped in Milyang, South Gyeongsang Province, in 2004. In just some 10 days of its release on April 17, the film attracted over 100,000 viewers, setting a new record for a Korean independent film. It also won the jury prize, popular choice and international critique awards at the Deauville Asian Film Festival in France in March.

The film and its lead actress are already being touted as the greatest milestones and discoveries for Korean cinema this year.

The film is neither overly pathetic nor bitter, despite its theme. The main character hardly reveals her thoughts and feelings until the end of the movie.

"Many other films on similar topics tend to have the main character pouring out their emotions. But do actual victims of such crimes really do that? They may well try to hide their wounds and feelings. People often struggle to talk about their less serious hardships", said Cheon.

"Acting wasn't that hard, but I was afraid the audience may be offended by the film or think the character was not genuine. I had to find a way to approach the role as realistically as possible, which meant hiding everything. I thought perhaps my character tried to hide everything because she knew that nothing would change despite the whirlwind of emotions and hurt that she had inside".

Cheon wants to switch things up in the future after taking on such heady roles. "I want to play an ordinary, fun-loving, and carefree character in her twenties", she said.

However, her next film also deals with weighty social issues. In "Cart" she plays a young woman who gets laid off from her job as a part-time worker at a supermarket. It seems as though she is not destined to play easy roles just yet.

"Starlet Delivers Nuanced Performance as Rape Victim"
by HanCinema is licensed under a Creative Commons Attribution-Share Alike 3.0 Unported License.
Based on a work from this source