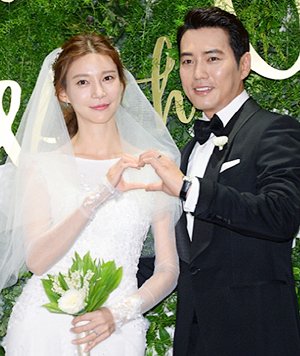 "Cha is now in the early stage of pregnancy. She is taking things easy and focusing on preparing to be a mother", the agency said in a press release.

"I'm so grateful to my wife. I am thankful for this great blessing and very happy", Joo was quoted as saying. "I will do my best to take care of her".

The two became romantically involved after appearing together in the MBC soap "Glamorous Temptation" last year. They got married in May this year after a year of dating.

"Star Couple Expecting 1st Child"
by HanCinema is licensed under a Creative Commons Attribution-Share Alike 3.0 Unported License.
Based on a work from this source