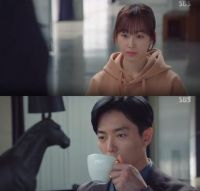 Hyeon-soo told Jeong-woo, "You are trying to win me by being tough, but I don't care although it's appealing".

Jeong-woo said, "I can see you're anxious. I can see you drifting apart already. You claimed to be in love". Hyeon-soo said, "I believe two people can come back together even after they drift apart. But not Jeong-seon and I".

Jeong-woo said, "Don't women usually get attracted to tough men?" Hyeon-soo replied, "On the inside".

Jeong-woo coldly told her, "Stop pretending to be his parent and go work". Hyeon-soo asked, "Why don't you plan on making money with my work? The production doesn't look at my work the way you do. I want to bring in money for the company before I leave".

"[Spoiler] "The Temperature of Love" Seo Hyun-jin draws the line with Kim Jae-wook "
by HanCinema is licensed under a Creative Commons Attribution-Share Alike 3.0 Unported License.
Based on a work from this source