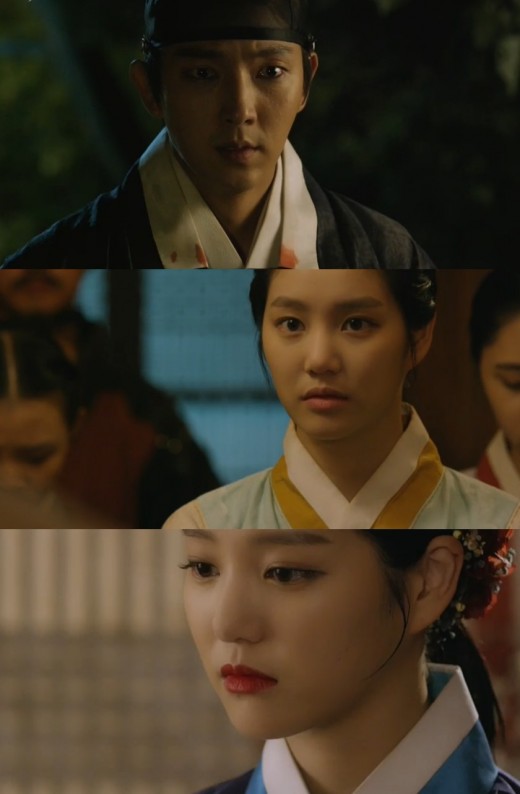 'Scholar Who Walks the Night' Lee Yoo-bi volunteered to become a sacrifice after she found out she was the last resort to get rid of Gwi.

Lee Yoo-bi left Lee Joon-gi and was headed to the palace.

On the 15th episode of MBC's 'Scholar Who Walks the Night', Yang-seon (Lee Yoo-bi) cried at the finding she was the last resort to get rid of Gwi.

Yang-seon just hoped she would be able to live Kim Seong-yeol (Lee Joon-gi) normally. However the reality was cruel. Yang-seon left on her way to volunteer as a sacrifice girl, while Seong-yeol was asleep..

As Yang-seon showed up on her own, Soo-hyang (Jang Hee-jin) dressed her up, while feeling sorry for Yang-seon's ill-fated destiny.

Yang-seon dealt with the situation indifferently, while saying "It's not my fault to be have been born like this, but it is my decision to die like this". Her eyes turned red with tears as she said, "Scholar, Seonyeol, please stay healthy and safe".

When Seong-yeol found out Yang-seon had disappeared, he went to see Ho-jin (Choi Tae-hwan) right away. Ho-jin informed that Gwi had sucked blood from his motherly side and still could survive. The information shock Seongyeol. Will Seongyeol be able to save Yang-seon?

"[Spoiler] 'Scholar Who Walks the Night' Lee Yoo-bi volunteers to become a sacrifice"
by HanCinema is licensed under a Creative Commons Attribution-Share Alike 3.0 Unported License.
Based on a work from this source